The American Civil Liberties Union, the ACLU of Nebraska, and the law firm Sullivan & Cromwell LLP have filed a lawsuit in state court on behalf of three couples seeking to strike down a state policy that bans gay and lesbian individuals and couples from serving as foster parents.

The state’s policy, dating from 1995, prohibits the Nebraska Department of Health and Human Services from placing foster children with “persons who identify themselves as homosexuals” or persons who are “unrelated, unmarried adults residing together.” The ban also prohibits these individuals from adopting children from the foster care system, since individuals must first be licensed as foster parents before they can adopt children from state custody.

There are over 3800 children in the foster care system in Nebraska, too many of whom have been through multiple failed placements, long stays in emergency shelters, and long waits to be adopted.

Every major children’s health and welfare professional group – including the American Academy of Pediatrics, the American Psychological Association and the Child Welfare League of America – recognizes that over 25 years of scientific research shows that parents’ sexual orientation has no relevance to parenting ability or the well-being of children.

In August 2015, the judge ordered the old memo be stricken and that plaintiffs and other qualified applicants be permitted to be licensed as foster parents without any regard for their sexual orientation.

Championing 4,000 At-Risk Kids by Standing Up for Greg & Stillman 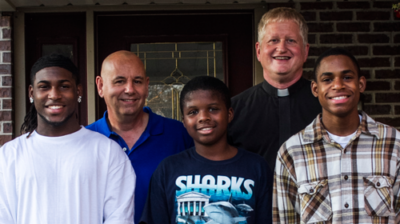 Championing 4,000 At-Risk Kids by Standing Up for Greg & Stillman
Support our on-going ligitation and work in the courts Donate now