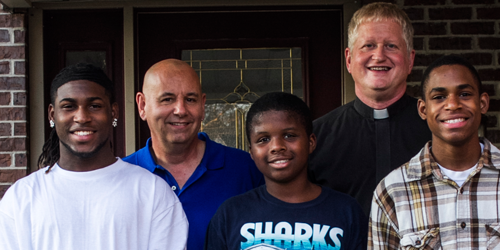 Greg and Stillman have been in a committed relationship for over 30 years. They were married in 2008 in California. They have five children, all of whom they adopted out of foster care in California, where the family previously resided.

Greg is a minister at First-Plymouth Congregational Church, United Church of Christ (“UCC”), a calling that brought the family to Nebraska in 2011. Stillman, who previously worked as a social worker and has been a stay-at-home parent for the past 14 years, recently began working with at-risk, developmentally delayed and behaviorally challenged children at Park Middle School in Lincoln.

Greg and Stillman have demonstrated the capacity to care for and heal children who have endured difficult early life experiences. Most of their children, who now range in age from 13 to 20, were placed with the family after years of abuse and multiple foster placements.

One of their children, who came into the family at the age of five still in diapers, had not learned to use eating utensils and suffered from severe speech impediments. By the age of seventeen, he brought home a report card with all A’s and one B. Their eldest child, who had been through 17 foster homes and three failed adoptions in three different states, is now a college sophomore.

Now that some of Greg and Stillman’s children are grown, they feel they can open their hearts, family, and home to additional children. They are particularly interested in caring for hard-to-place children. Their desire to welcome more children into the family was all the more strengthened after they read billboards advertising the need for more qualified foster parents in Nebraska.

Greg and Stillman contacted HHS to apply to become foster parents but were told they were not eligible because they are a same-sex couple.