The ACLU, Prison Law Office, and Civil Rights Education and Enforcement Center filed a federal lawsuit against President Trump, Immigration and Customs Enforcement (ICE) and the Federal Bureau of Prisons (BOP) for violating the constitutional rights of immigrants detained at FCI Victorville, a federal prison in Victorville, California.

In early June, 2018, ICE began transferring immigrants from ICE and Customs and Border Protection facilities to prisons operated by the BOP, under an agreement that allows the detention of 1,600 people in BOP facilities in Washington state, Oregon, California, Arizona and Texas. Many of those imprisoned are asylum seekers. Some have been separated from their children.

Immigrants detained at the prison face dangerous and inhumane conditions. Medical and mental health needs are ignored and when the men try to seek medical help, they are often dismissed, mocked, and verbally abused by staff who threaten them with isolation and other punishment. They do not have access to legal materials and the most basic information is only provided to the detainees in English—which most do not speak. They face additional deprivations including inadequate and insufficient food, and minimal access to outdoor spaces for fresh air and sunlight.

The lawsuit, brought by six detained immigrants on behalf of all ICE detainees at Victorville, raises claims for violations of their rights under the Due Process Clause of the Fifth Amendment as well as the Free Exercise Clause of the First Amendment and statutory rights under the Religious Freedom Restoration Act. We are asking the court to order ICE to immediately remedy the unlawful conditions and ultimately remove immigrants from the prison.

The Trump Administration Is Preventing Detained Immigrants From Practicing Their Religion 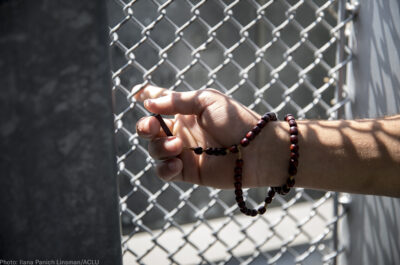