The American Civil Liberties Union, the ACLU of Georgia, the Center for Reproductive Rights, and Planned Parenthood filed a lawsuit, SisterSong v. Kemp, challenging a Georgia law banning abortion as early as six weeks into pregnancy, before many people know they are pregnant. This law would practically eliminate abortion care in the state and impose an unconstitutional ban on abortion. The case is currently stayed before the U.S. Court of Appeals for the Eleventh Circuit pending a decision in Dobbs v. Jackson Women’s Health Organization.

In the lawsuit, plaintiffs — which include reproductive justice advocates, health care providers, and their patients — argue that the law, House Bill 481 (H.B. 481), would ban practically all abortions in the state and disproportionately affect people of color, people struggling financially, and rural Georgians. This law is especially dangerous in Georgia, where people face some of the highest rates of maternal mortality in the nation, especially among Black Georgians.

In March 2019, the Georgia Legislature passed H.B. 481, which was later signed into law by Gov. Brian Kemp in May 2019. On behalf of plaintiffs, shortly after the law was signed, the ACLU and partners filed a challenge against H.B. 481 seeking to block the law before it took effect in January 2020.

Granting a motion filed by plaintiffs, a federal court in Atlanta blocked the ban in October 2019 and granted a permanent injunction striking down the ban in July 2020. The case is currently on appeal in the U.S. Court of Appeals for the Eleventh Circuit, which heard argument on September 24, 2021 and subsequently stayed the case pending a decision in the U.S. Supreme Court in Dobbs v. Jackson Women’s Health Organization. Because of this lawsuit, H.B. 481 has never gone into effect.

Georgia is one of several states that have passed laws banning abortion since 2019, representing an unprecedented surge of legislation designed to challenge Roe v. Wade and ban abortion.

In 2019 alone the ACLU challenged similar abortion bans in Kentucky and Ohio, a near total ban in Alabama, and an 18-week ban in Arkansas, among other litigation.

UPDATE (October 2019): A federal district court in Atlanta blocked the abortion ban, which was scheduled to take effect January 1, 2020. The court’s ruling blocks the law’s implementation as litigation proceeds.

UPDATE (July 2020): The U.S. District Court granted a permanent injunction, striking down the law. Georgia filed an appeal in the U.S. Court of Appeals for the Eleventh Circuit.

UPDATE (September 2021): Oral argument took place on September 24. On September 27, the U.S. Court of Appeals for the Eleventh Circuit stayed the case pending a decision in the U.S. Supreme Court in Dobbs v. Jackson Women’s Health Organization, a challenge to Mississippi’s 15-week ban brought by the Center for Reproductive Rights.

Georgia Tried to Ban Abortion, So We Sued. 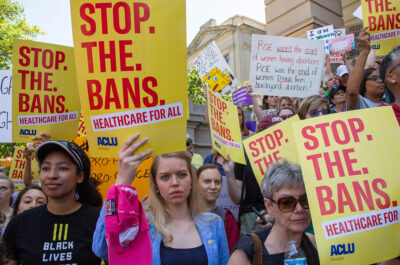 Georgia Tried to Ban Abortion, So We Sued.
Support our on-going ligitation and work in the courts Donate now