The First Amendment guarantees the public and the press the right to witness certain government proceedings – including public executions. On August 25, 2014, the ACLU and the ACLU of Oklahoma filed a lawsuit arguing that this right was violated during the botched execution of Clayton Lockett in Oklahoma. The lawsuit was filed on behalf of The Guardian and The Oklahoma Observer, whose journalists were deprived the right to view and fully report on the execution.

On April 29, 2014, members of the press and other witnesses assembled to observe the execution of Clayton Lockett. As Lockett was brought into the execution chamber and his intravenous lines were prepared, the viewing blind that enables visual access remained lowered, preventing the witnesses and journalists in the viewing area from observing the start of the process. It was lifted just before employees began administering lethal drugs. However, several minutes later, Lockett began to visibly struggle and attempt to speak. A few minutes later, Oklahoma officials again lowered the shade, and it remained drawn until Lockett was pronounced dead more than 20 minutes later.

This interrupted access meant that the press and public received only truncated access to a fundamental criminal justice proceeding. Eyewitness accounts did not include critical moments of the start of the execution process before the viewing shade was raised, including Clayton Lockett’s entry into the execution chamber and the numerous attempts to insert intravenous lines into his veins. The State again shut down media access after Clayton Lockett started showing signs of evident distress, and witnesses were unable to verify the nature and source of the sounds coming from the execution chamber, which indicated pain and suffering. As a result, the press reports and public conversation in the aftermath of Lockett’s death were based on a version of events effectively “edited” by the government.

Our lawsuit asks the court to recognize the media and other witnesses’ First Amendment right to view executions without interruption, from when the condemned enters the execution chamber until the execution has concluded. We also ask that the court ensure Oklahoma authorities take steps to protect this right.

The death penalty represents the most powerful exercise of government authority – the intentional ending of a human life. Without media access to executions, the public has no way to assess the propriety and lawfulness of the death penalty, or to otherwise exercise oversight over this critical stage of the criminal justice process.

Oklahoma's Response to Botched Execution: Hide the Next One from the Public 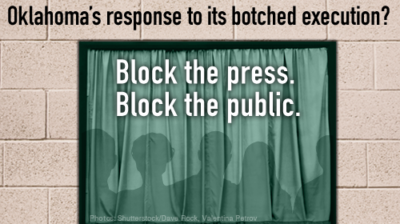 Oklahoma's Response to Botched Execution: Hide the Next One from the Public 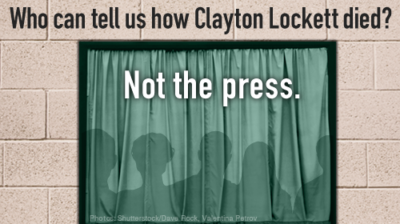 An Execution, Censored
Support our on-going ligitation and work in the courts Donate now