The American Civil Liberties Union, The ACLU of Michigan, Americans United for Separation of Church and State, and Freedom from Religion Foundation have filed a federal lawsuit challenging the city of Warren’s ban on an atheist booth in a city hall atrium where the city has allowed a prayer station.

The atrium has been set up by city officials as a public space that can be reserved by a wide variety of groups and individuals, including civic organizations and Warren, Mich. residents, but the mayor is not allowing an atheist to use space in the atrium because his belief system “is not a religion.”

Since 2009, the city has allowed a local church group to run a prayer station in which volunteers distribute religious pamphlets, offer to pray with passersby, and discuss their religious beliefs with people who approach the station. The lawsuit does not seek to have the prayer station removed, but instead asks the court to order the city to treat believers and non-believers equally.

The lawsuit was filed on behalf of Douglas Marshall, a Warren resident whose request to install a “reason station” – a station that is similar in size, structure and function to the prayer station – was rejected by the city.

Less than two weeks after Marshall submitted an application to city officials it was rejected by Warren Mayor James Fouts. In the rejection letter, Mayor Fouts writes:

“To my way of thinking, your group is strictly an anti-religion group intending to deprive all organized religions of their constitutional freedoms or at least discourage the practice of religion. The City of Warren cannot allow this.”

This lawsuit aims to protect the First Amendment rights of all Warren residents, regardless of their religious or philosophical beliefs or non-beliefs.

Sorry Mr. Mayor, But Atheists Have Rights, Too 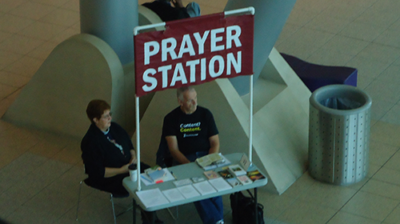 Sorry Mr. Mayor, But Atheists Have Rights, Too
Support our on-going ligitation and work in the courts Donate now