The American Civil Liberties Union and the ACLU of Louisiana are challenging the Webster Parish School District’s widespread practice of subjecting students to school-sponsored Christian prayer, proselytizing, and other religious rituals. The lawsuit was filed on behalf of Christy Cole, a parent of a Webster Parish student, and her daughter, K.C., who attends Lakeside Junior and Senior High in Sibley.

The lawsuit, filed in U.S. District Court for the Western District of Louisiana, details pervasive promotion of religion throughout district schools. Christian prayers are broadcast each morning over the PA system. School events, including athletic events, pep rallies, assemblies, and graduation ceremonies, incorporate official prayer, proselytizing, and other religious messages. Graduation ceremonies are frequently held in churches, and at times, they resemble church services that include Bible verses and prayers. School officials have also told students that evolution is a “fairy tale” and implied that the Bible should be taken literally. The school has invited guests onto campus to preach to students, including Christian rapper Mynista.

According to the complaint, when K.C. started to stay seated during morning prayer, other students ridiculed her. When K.C.’s parents stayed seated during graduation prayers, other parents hissed in disapproval. One of K.C.’s teachers also implied to the class that the Bible must be taken literally and mocked her when she questioned him.

The lawsuit asks the court to declare the district’s policies and practices unconstitutional and to block the district from continuing them.

Status: Victory! The school district agreed to put an end to school-sponsored Christian prayer, proselytizing, and other religious rituals under the terms of a consent decree approved in May 2018. 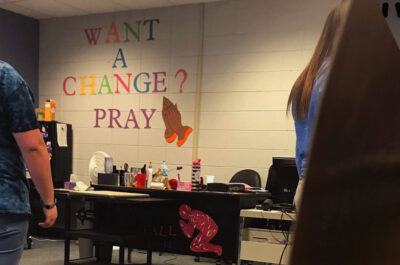 Proselytizing Public School Official: ‘I’ll Stop When Someone Makes Me Stop’
Support our on-going ligitation and work in the courts Donate now