In this case, the U.S. Court of Appeals for the Third Circuit held that the Philadelphia metropolitan transit system’s ban on “political” and public issue advertisements violated the First Amendment because the policy could not be applied in a logical, consistent manner.

The ACLU filed a federal lawsuit against Southeastern Pennsylvania Transportation Authority (SEPTA) over its refusal to allow the Center for Investigative Reporting (CIR) to advertise on SEPTA’s vehicles.

CIR sought to advertise reporting from its news site, Reveal, which analyzed 31 million public records made available through the Home Mortgage Disclosure Act and found dramatic racial disparities in the conventional home mortgage market in 61 areas across the country, including Philadelphia. CIR’s proposed ad would have featured an informative graphic showcasing the public data that CIR’s journalists collected and CIR’s analysis of that data.

SEPTA rejected CIR’s proposal. It said that CIR’s proposed advertisement violated its ban on advertisements that are “political in nature” or that express an “opinion, position, or viewpoint on matters of public debate.” Representing CIR, the ACLU argued that SEPTA’s ban on “political” and public issue advertisements violated the First Amendment because it gave government officials too much discretion and encouraged arbitrary or selective enforcement.

The U.S. Court of Appeals for the Third Circuit agreed, holding that SEPTA’s ban could not be consistently and logically applied. For example, when the court asked whether an advertisement that depicted three girls of different races holding hands with a message that says, “This is how racism ends,” would be political, counsel for SEPTA responded that it would not. But when the court adjusted the hypothetical to include the same picture with a message that says, “This is what America looks like,” counsel for SEPTA could not immediately answer whether it was political.

The Third Circuit warned that, without clear guidelines to distinguish between permitted and prohibited advertisements, there was a real risk that enforcement officials’ personal politics would improperly influence their decisions about what counts as political. The court concluded that SEPTA’s policy could not be enforced to block CIR’s proposed advertisement.

The U.S. Supreme Court subsequently rejected SEPTA’s petition to take up the case. The decision has led to increasing recognition among lower courts that undefined bans on “political” and public issue advertisements violate the First Amendment.

On Philly Public Transportation, the Censor Rides Along With You 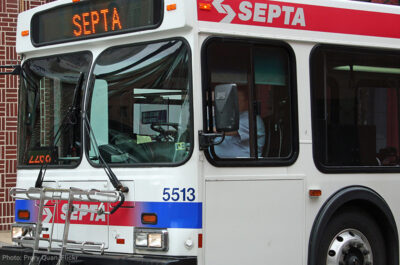 On Philly Public Transportation, the Censor Rides Along With You
Support our on-going ligitation and work in the courts Donate now