The American Civil Liberties Union, the ACLU of New Hampshire and the Americans United for Separation of Church and State are challenging a statewide tuition tax-credit program in New Hampshire that would divert taxpayer funds to private religious schools in violation of the state constitution. The lawsuit was filed on behalf of eight plaintiffs, including clergy, public education advocates and parents of public school children.

The Education Tax Credit Program allows businesses to reduce their tax liability by receiving an 85 percent tax credit in exchange for donations made to K-12 scholarship organizations, which will pay for tuition at religious and other private schools. Since there is no state oversight of the schools receiving funds, religious schools will be able to use the donations for religious instruction, indoctrination and religiously based discrimination.

The program, passed by the New Hampshire Legislature last year, took effect Jan. 1. It allows up to $3.4 million in tax credits to be claimed in the first year and $5.1 million during its second year. It provides for additional increases in tax credits in subsequent years.

The lawsuit asks the court to declare the tax-credit program unlawful and block the state from further implementation.

A School Voucher by Any Other Name 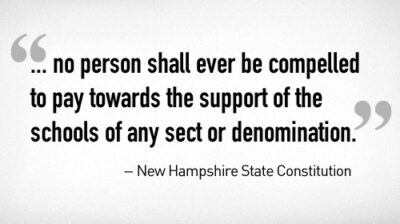