On September 21, 2013 the American Civil Liberties Union and the ACLU of Kansas filed a lawsuit challenging Kansas’ two-tiered voter registration system. The complaint charges that eligible voters are being divided into separate and unequal classes, in violation of the Kansas Constitution’s equal protection guarantees.

Kansas has implemented a dual registration system to prevent people who use the federal form from voting in state and local elections unless they show additional documentary proof of citizenship. Voter registration for thousands of Kansans is already being held in “suspense” – essentially limbo – because of the new documentation requirements. Under the two-tiered system, people who complied with all legal requirements for voter registration are denied the right to vote in state and local elections because of the registration form they used.

The ACLU complaint charges that state officials have, without statutory authority, “unilaterally established an unprecedented and unlawful voter registration system that divides registered voters in Kansas into two separate and unequal classes, with vastly different rights and privileges…based on nothing more than the method of registration that a voter uses.”

On August 21, 2015, Judge Franklin Theis rejected Kobach’s summary judgment motion and issued an order strongly criticizing the dual registration system. Theis determined that Kobach’s ad hoc registration procedures are “wholly without a basis of legislative authority” and violate existing state law. The ACLU charges that Kobach lacks the authority to create a system that divides registered voters into two separate and unequal classes because of the registration form they use. Theis wrote that Kobach “is proclaiming now as law that which does not exist and, in fact, is contrary to existing state law and federal law.”

Update: A state court reiterated in January 2016 that Secretary of State Kris Kobach’s office overstepped its legal authority by creating a system that prevents federal form registrants from voting in state and local elections. In June 2016, the court denied Kobach’s motion for dismissal. 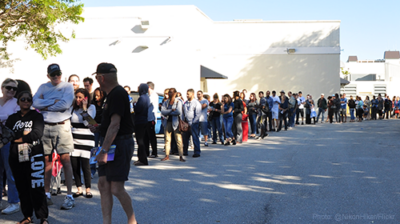 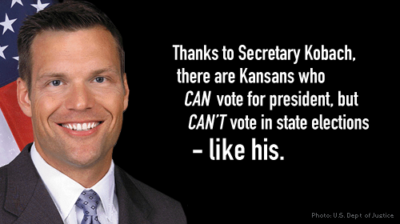