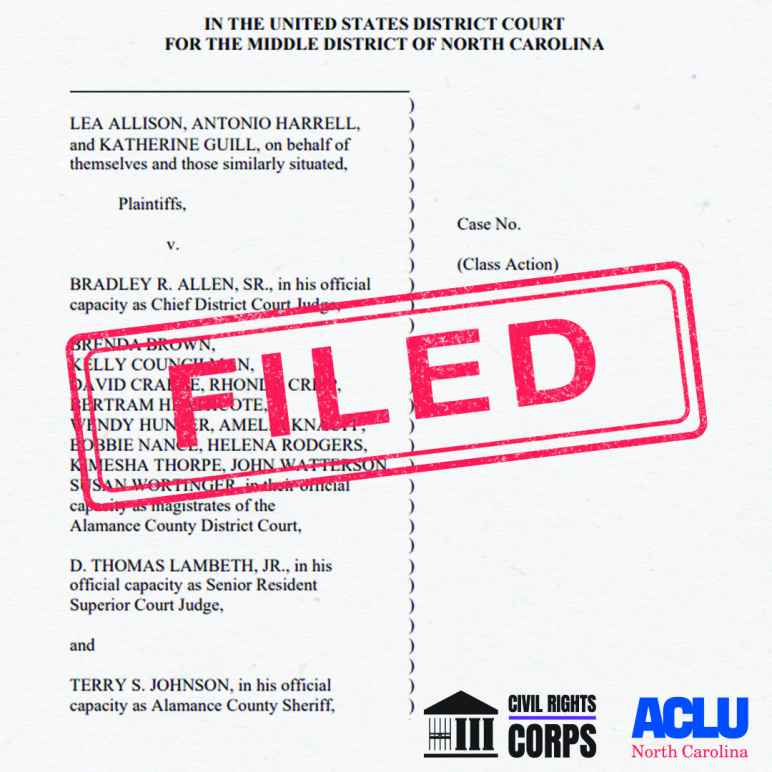 The American Civil Liberties Union, ACLU of North Carolina, and Civil Rights Corps filed a federal class-action lawsuit against court officials in Alamance County, North Carolina, for violating the constitutional rights of people who are presumed innocent but are confined to jail because they cannot afford to pay bail following their arrest. The lawsuit seeks an overhaul of Alamance County’s unconstitutional cash bail system that the groups say discriminates against poor people, locking them up because they cannot afford to pay for their freedom while allowing those who have money to go home.

The lawsuit is filed on behalf of three people incarcerated in the Alamance County jail who cannot afford to pay the bail amount set by a magistrate with no consideration of their ability to pay, and no attorney provided during bail setting. Filed in the U.S. District Court for the Middle District of North Carolina, the lawsuit asks the court to declare Alamance County’s bail practices unconstitutional and to ensure that no one is held in the county jail only because they are unable to pay their bail.

The lawsuit describes a two-tiered legal system in which a person’s freedom depends on their ability to afford bail, a clear violation of due process and equal protection. The lawsuit also claims violations of the right to counsel because poor people accused of crimes are not provided attorneys to represent them when bail is being set.