Remembering the Woman Who Renovated the House that RBG Built 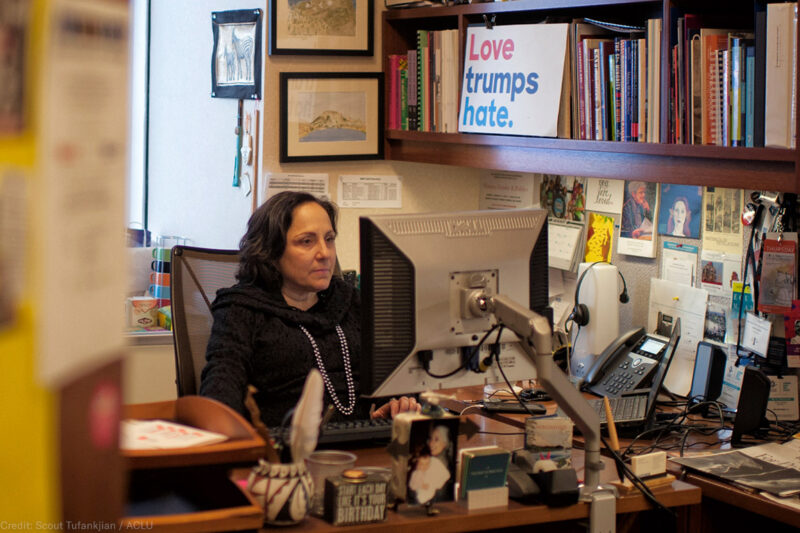 On the 50th anniversary of Selma’s Bloody Sunday, one of the darkest stains in our nation’s civil rights history, President Obama spoke with hope and confidence about Americans who were “unencumbered by what is, because you’re ready to seize what ought to be.” Lenora Lapidus lived her life by this principle.

It’s painful to write this. It’s painful to memorialize and grapple with the reality of losing someone who not only established a global legacy for herself as a civil rights leader, but showed to be a compassionate, caring, kind, selfless, and inspiring friend. Our heart breaks for her family.

Lenora was a pillar of the ACLU. She began here as an intern in 1988, served as legal director of the ACLU of New Jersey, and led the Women’s Rights Project since 2001. She furthered equality in employment and education, held institutions accountable for perpetuating sexual violence and gender discrimination, and defended the most marginalized among us.

Lenora was a visionary lawyer. She litigated Lenahan v. United States, winning a decision from the Inter-American Court of Human Rights holding that the United States violated international human rights law for failing to respond adequately to gender-based violence. She represented servicewomen in a lawsuit that led to the military’s repeal of its policy excluding women from combat positions, Hegar v. Panetta.

She was part of the team that brought a landmark challenge to the patenting of human genes, winning a unanimous 2013 decision by the U.S. Supreme Court, Association for Molecular Pathology v. Myriad Genetics, that assured that research benefiting public health would not be impeded by corporate ownership of selected genes. Because of Lenora’s courage, and thanks to the work of her ACLU colleagues who helped bring the case with her, the health and lives of millions of women and men battling cancer would be improved. The Myriad case would come to embody the two battles that Lenora so valiantly fought: the battle against cancer and the fight against gender injustice.

We will never encounter another Lenora Lapidus in our lifetime. But we can and will continue her legacy by fighting for the marginalized communities she dedicated her life of public service to. In her honor, we will press on. We will remain unencumbered by what is, because we’re ready to seize what ought to be.

Below is a sampling of testimonials from people whose lives have been touched by Lenora over the years:

“We were just together celebrating the introduction of BE HEARD in Congress and it was so good to see you. You never stop in your quest for justice. Thank you for your leadership, for your kindness and humanity.”
– Vanita Gupta, President and CEO of the Leadership Conference on Civil and Human Rights

“V-Day and One Billion Rising mourn the loss of Lenora Lapidus, fierce vagina warrior, who led the Women’s Rights Project at the ACLU with brilliance, compassion, and devotion. We will miss you and pledge to continue the fight for justice for all women and girls.”
– Eve Ensler, feminist, activist, and playwright of The Vagina Monologues, and V-Day Organization

“I have always known Lenora to be a fighter, but little did I know the depth of her strength and courage. She has boldly fought for women’s equality across this country while quietly and with utmost dignity struggling for her life. Lenora, you define determination and grace under pressure. We are fortunate that you devoted so much of your life to the ACLU and to the cause of justice.”
– David Cole, ACLU Legal Director

“Thank you for the many things you’ve taught me, often by example. The way you’ve built a career on passion work and placed your family so squarely first is an example I’ve drawn from again and again.”
– Fatima Goss Graves, President and CEO of National Women’s Law Center

“Lenora showed me what fearlessness looked like as an advocate, and as a human being. When I was diagnosed with breast cancer myself almost five years ago, her example of how you just keep showing up in the face of it was a source of strength that I have tried again and again to model myself after, and a source of inspiration and hope.”
– Emily Martin, former WRP lawyer, current Vice President for Education and Workplace Justice, National Women’s Law Center

“Indomitable. It’s the first word that comes to mind when I think of Lenora Lapidus… She was a force to be reckoned with and didn’t take ‘no’ for an answer.”
– Liz Welch, Faith and Program Strategist, ACLU

“Her request almost 10 years ago that I join WRP to litigate Title IX cases changed the course of my life, for which I will be forever grateful. Lenora combined fierce idealism and an indomitable spirit with the pragmatism needed to function as a lawyer and an administrator.”
– Amy L. Katz, WRP Cooperating Attorney

“The world lost a fierce advocate and champion for justice, and the ACLU lost a dear friend and supportive colleague.”
– Reggie Shuford, Executive Director, ACLU of Pennsylvania

“Because Lenora’s energy and relationships weren’t bound by formal limits, she stayed in touch and continued to include me in Women’s Rights Projects gatherings even after I left the ACLU. Departmental divisions meant little to her; as far as she was concerned, we were all engaged together in the larger struggles for human rights, racial justice, gender dignity, and an end to poverty.”
– Ariela Migdal, former WRP attorney