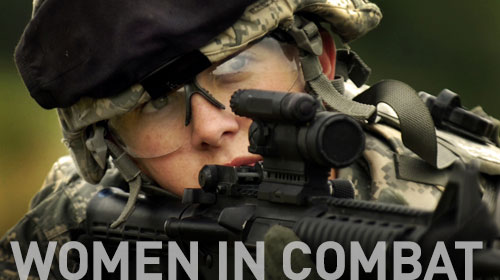 On January 24, 2013, we saw a great victory for U.S. servicewomen when the Department of Defense announced it was ending the ban on women serving in combat units and occupational specialties. As the Pentagon and the armed services begin implementing the change in policy, there are many issues that must be resolved, and we’ll be keeping a close eye on the process. In an ongoing blog series, we will bring you voices of military experts, veterans, and other stakeholders who will discuss these issues and the need to fully integrate women in the armed forces.

During my 25-year career as a Navy officer and helicopter pilot, I was fortunate to witness firsthand the genuine skills and capabilities of U.S. servicewomen. But at the same time, these brave women were limited in their opportunities by arbitrary rules that had nothing to do with their abilities and, if anything, hurt the readiness of our military. I also saw women rise to the occasion when the policies that excluded them from certain positions yielded to the realities of modern warfare and the challenges of maintaining an effective fighting force.

I first had the chance to observe women break new ground in the military when I was stationed with the Navy’s first female helicopter pilot (in the interest of full disclosure, I have to admit she happens to be my wife of 35 years).

When Joellen Drag first reported to her helicopter squadron in 1974, she was not allowed to hover over the fantail or flight deck of a Navy seagoing ship. She had the same training and abilities as her male counterparts, but she did not have the same opportunities to develop advanced qualifications and experience needed to compete for higher rank. But the law didn’t just hurt Joellen’s career—it also prevented our Navy from utilizing a skilled pilot.

To fight this unfair policy, Joellen joined a lawsuit challenging the federal law that stood in the way of her dream of following the footsteps of her father who was a career naval officer. Fortunately, the judge declared the law unconstitutional in 1978, and Joellen went on to have a successful career in the Navy, eventually retiring as a captain.

The legal battle was won. But the war was not. Fast-forward to 1991 and the first Gulf War. Women were everywhere in theater, doing just about everything they had been trained to do. I don’t recall many questions about whether the law allowed them to be there, but I did know that women were essential to our preparation for combat operations. And I’m certain no commanding officer would want to lose a fully-qualified crew member just because she was, well, a she.

With the buildup essentially complete and Saddam Hussein not withdrawing from Kuwait, suddenly the lights went out in Bagdad. We were in a combat situation, complete with scud missiles fired at coalition forces and planes shot down. And again, no one questioned the presence of women doing what they were trained to do…or so I thought.

I was assigned to the staff of the Navy’s logistics support force in Bahrain where I oversaw the operations of 32 shore-based planes and helicopters. One morning the officer-in-charge of one of the helicopter detachments appeared at my office door along with one of the female pilots assigned to the unit. They asked to speak with me, then stepped into my office and closed the door.

Turns out the night before, the female pilot was diverted from a routine ship resupply mission and ordered to fly to an oil platform off Kuwait City to pick up Iraqi soldiers who had been captured. Apparently word got back to the Wing Commander in Virginia that a female crewmember had flown into the combat zone, which was not permitted.

I assured the pilot she had done the right thing. As she departed my office, I also reminded the pilot to log combat flight time on her flight reports. My small actions may not have influenced what is the norm today, but it meant a lot to the women pilots for whom I felt a responsibility to treat with fairness and equality. After I passed this situation along to my admiral, I never heard another word. Rules aren’t necessarily made to be broken, but this one was out of date.

In large part because of the Desert Shield/Desert Storm experiences, most restrictions on women serving on combatant vessels and aircraft were lifted in 1994, the same year the direct ground combat exclusion policy was put in place. Since then we’ve become very aware of what our servicewomen have done in combat in Iraq and Afghanistan, despite this policy. They’ve been decorated for heroism and have died for their country.

And so Joellen and I were elated when we learned that the Pentagon was finally rescinding the policy, knowing full-well what that meant to the thousands of women who are currently serving our country or who aspire to do so. From our own experience, we know that women have the ability to serve in combat roles and, in doing so, have made important contributions to our military readiness and capabilities. That’s why, when the Pentagon works through the details in implementing the change in policy, it should open all occupations and units to women, allowing them to compete and serve in positions for which they are qualified and affording them opportunities to be promoted to the highest levels of leadership.

It’s time to do away with the brass ceiling once and for all.

Captain Dwayne Oslund, USN (Ret.) served 25 years in the U.S. Navy. He was a helicopter pilot who commanded a primary training squadron in Corpus Christi, TX, with 90 male and female instructor pilots from a wide range of naval aviation communities. During that tour, his squadron trained over 250 men and women from the Navy and Marine Corps. He holds a Master of Science degree in Management with a specialty in Manpower, Personnel and Training Analysis from the Naval Postgraduate School, and also served as the Navy’s Officer Promotion Planner on the staff of the Chief of Naval Operations. Shortly after the Iraqi invasion of Kuwait in August 1990, CAPT Oslund was among the first Navy personnel to forward deploy to Riyadh, Saudi Arabia, when he led a small contingent to standup a Navy liaison element to US Central Command. He was subsequently assigned to the Navy logistics support force staff in Bahrain.