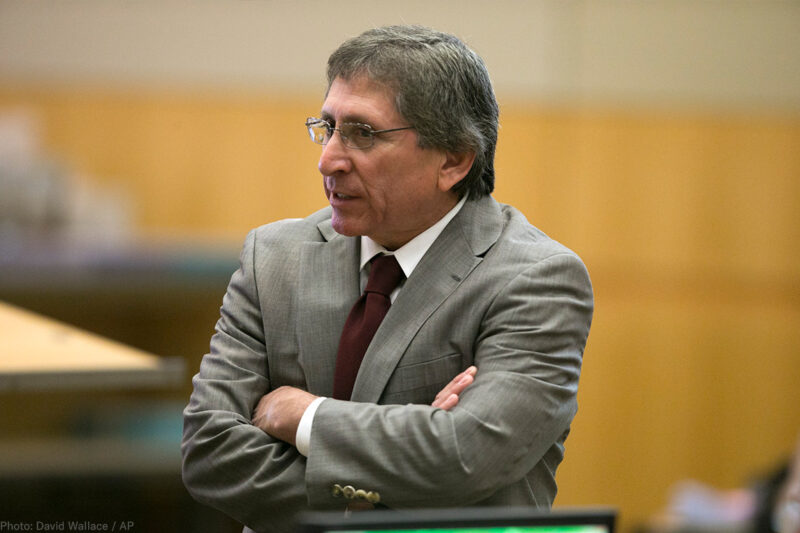 The Arizona Supreme Court will soon consider the misconduct of one of Maricopa County Attorney Bill Montgomery’s top prosecutors: Juan Martinez. Martinez gained national notoriety when he prosecuted Jodi Arias for murder in 2008, but his aggressive and often unethical conduct was well-known in Arizona well before then. It’s time he’s held accountable.

The ACLU of Arizona and the ACLU Capital Punishment Project yesterday filed an amicus brief urging the Court to do just that, and in doing so highlighted the pervasive culture of misconduct at the Maricopa County Attorney’s Office.

Until recently, the Arizona State Bar had failed in its duty to seek discipline against Juan Martinez even though the Arizona Supreme Court has repeatedly spotlighted his behavior and misdeeds. Having never faced consequences for his misconduct, Martinez has to no surprise continued to flout the law to obtain convictions and death sentences.

As with many people in positions of power, Martinez has proved an elusive target in the past. In 2017, Arizona Attorneys for Criminal Justice filed a complaint with the State Bar citing Martinez’s long history of misconduct. The State Bar finally initiated discipline proceedings against Martinez. But unfortunately, after a poorly presented case by the Bar, the panel considering the complaint dismissed it and declined to discipline Martinez. The State Bar has now appealed to the Arizona Supreme Court. Our brief calls on the Court to reverse the bar panel’s erroneous decision and to appoint a special prosecutor to handle the complaint against Martinez.

Unfortunately, Juan Martinez’s behavior is not uncommon in the Maricopa County Attorney’s Office. It is indicative of a decades-long culture of misconduct that flows from the top down, one that prioritizes winning convictions over pursuing fairness and executing justice.

One of the more egregious examples is prosecutor Noel Levy. Over his long career at the Maricopa County Attorney’s Office, Levy sent two innocent people to death row. Debra Milke spent 24 years incarcerated, including 22 on death row, for a crime she did not commit. At her 1990 trial, Levy never shared with Milke’s defense team that the lead detective, who claimed Milke had confessed to him, had a long history of lying under oath and other misconduct – information Levy was required to disclose to the defense under the federal and state constitutions. Milke was finally released from death row in 2015, after Levy’s prosecutorial misconduct was exposed and that transparency allowed her to clear her name.

Two years after Milke’s trial, Levy prosecuted Ray Krone for the murder of a woman who worked at a bar he frequented. Levy relied on questionable bitemark evidence to secure a death sentence against Krone, who had no criminal history before the murder charge. But, it turned out that the bitemark comparison images had been manipulated to match Krone’s teeth. A decade later, DNA evidence cleared Krone and pointed to another man who was in prison for a sex crime. Krone was finally released after serving 10 years in prison, including four years on death row.

Despite the devastating harm caused to these two lives, and the great harm to the integrity of the criminal legal system, the Arizona State Bar never disciplined Levy for his gross misconduct in either case. It’s no coincidence that Maricopa County is one of the largest contributors of new death sentences in the entire country, in part due to its aggressive, overzealous, and often unethical, prosecutors.

This culture of impunity is so entrenched that prosecutors not only escape discipline for misconduct and unethical behavior, they are, in fact, rewarded in spite of it.

Prosecutors with known records of misconduct and unethical behavior have been honored and rewarded by the Arizona Prosecuting Attorney’s Advisory Council (APAAC), which includes Bill Montgomery as a member. APAAC named Martinez “Prosecutor of the Year” in 1999. Noel Levy received the same award several years before that and was later recognized with APAAC’s “Lifetime Achievement Award.” Martinez’s colleague Jeannette Gallagher, chief of the Capital Litigation Unit, has committed a string of improprieties across multiple cases. The Arizona Supreme Court has called her conduct inappropriate, improper, and unacceptable. Still, like Levy, she was honored with APAAC’s “Lifetime Achievement Award” in 2013.

It is not only the State Bar that can and should hold these prosecutors accountable. Maricopa County Bill Montgomery can and should take the initiative to clean up the culture of misconduct within his office. He has been serving in this elected position since 2010—that means he has had nearly a decade to begin restoring the public’s faith in his office and in the criminal legal system as a whole. Not only has he failed to adequately repair the damage caused by prosecutorial misconduct, he continues to operate in secrecy, failing to be transparent with the public and the press when questions about the rampant prosecutorial misconduct in his office.

No matter how serious the crime or a prosecutor’s zeal to win a trial, no one should be above the law. The Arizona Supreme Court has a chance to finally rein in this culture of prosecutorial impunity. It should make clear that Martinez’s unethical behavior has no place in the criminal legal system, and particularly not when people’s lives are on the line.