A Sheriff with his Head in the Sand 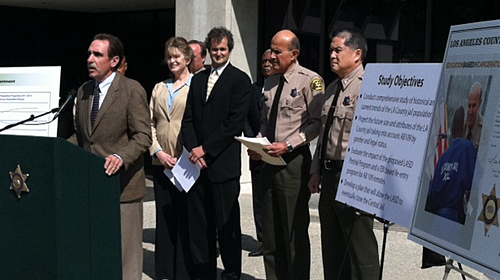 Originally posted by the ACLU of Southern California.

Gang-like cliques of sheriff’s deputies operating with impunity inside L.A. County jails. Department top brass encouraging a culture of violence and brutality against inmates. And a sheriff with his head in the sand.

Our report that prompted the creation of the commission was titled “Cruel and Usual Punishment: How a Savage Gang of Deputies Controls Men’s Central Jail”. The report — which includes blood-chilling, eyewitness accounts of sadistic deputy-on-inmate violence by jail chaplains, monitors, and other civilian volunteers — triggered a fire-storm of media attention and public criticism of L.A. County Sheriff Lee Baca.

The commission held a series of public hearings, calling witnesses including victims of deputy abuse, nationally-recognized corrections experts, and ACLU jails monitors and counsel. In addition, the staff of the commission, made up of pro bono lawyers from some of the most prestigious law firms in the country, interviewed more than a hundred other witnesses and reviewed tens of thousands of pages of documents.

At the September 7 hearing, a panel of the commission’s attorney investigators issued a preliminary report of their findings. The findings are devastating: investigators confirmed that LASD personnel “have used force against inmates disproportionate to the threat posed, or when there was no threat at all”; LASD’s process for investigating use of force incidents contains “multiple deficiencies”; dangerous, gang-like cliques have been operating inside the jails; Undersheriff Paul Tanaka not only discouraged investigations into alleged deputy abuses but also actually actively encouraged a culture a violence, urging deputies to act aggressively against inmates; Sheriff Baca, in turn, failed to discipline Tanaka or other top managers; and that top jails managers insulated Baca from information about the gang-like deputy cliques operating in the jails.

These findings come as no surprise to the ACLU: for the past four years, we’ve been intensively monitoring, carefully documenting, and vigorously denouncing the escalating pattern of deputy violence in the jails. In January 2012, the ACLU and the law firm of Paul Hastings filed a class-action lawsuit against Sheriff Baca and Undersheriff Tanaka on behalf of all detainees in the jails, seeking preliminary and permanent injunctive relief from the violence.

Although not unexpected the Citizens’ Commission findings are extraordinarily important. They strongly corroborate the ACLU’s allegations against Sheriff Baca, Undersheriff Tanaka, and other top jail management — who continue to minimize the pervasiveness of deputy violence, to suppress the evidence of deputy violence, and to malign the deputies’ accusers, even as the reign of terror in the jails continues. We look forward to the release next month of the commission’s final report; with findings by a blue-ribbon panel staffed by many of the finest law firms in the country, it’s going to be increasingly difficult for the sheriff to dismiss the deputies’ accusers as lacking in credibility.

Margaret Winter and Peter Eliasberg are two of the lead counsel for Plaintiffs in Rosas v. Baca; Ms. Winter testified in front of the Jail Commission.