Frederick Mardlin is a 32-year old married father of three who spent three years in jail for a crime that he did not commit. He was wrongfully convicted of burning down his house to collect the insurance. His court-appointed public defense attorney was unable to obtain the funds to retain an electrical expert to testify at his trial. That expert could have testified that the fire was not set intentionally but caused by faulty wiring. 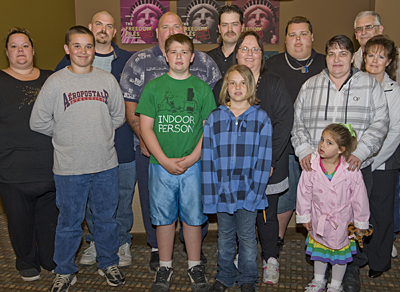 Fredrick Mardlin (back row, third from left) and his family at the offices of the ACLU of Michigan, celebrating the release of the new report.

So Fred sat in jail for three years before he was paroled. Because he insists on clearing his name, he is appealing his conviction. Although he is entitled as a matter of law to a court-appointed appellate attorney, the State of Michigan refuses to pay that attorney’s bills. Fortunately, the attorney has agreed to work on Fred’s case free of charge. The attorney has also located a pro-bono electrical expert who is willing to help Fred overturn his conviction.

Fred’s story illustrates how Michigan’s public defense system is often unable to effectively represent its clients and how, despite constitutional guarantees, a court hearing does not ensure a fair or just decision. Too often, innocent people go to jail, or those who have broken the law receive sentences that are harsher than the facts of their crime warrant.

Faces of Failing Public Defense Systems, a new report issued by the ACLU, ACLU of Michigan and the Campaign For Justice, shows how Michigan’s crumbling public defense system allows innocent individuals to become collateral damage as a result of inadequate legal representation. The report tells the stories of men who were charged with crimes, were inadequately represented by public defense attorneys and consequently incarcerated for years.

The American judicial system incarcerates people at a rate that is eight times higher than other industrialized nations. Sadly, we appear to have grown accustomed to it. Have Americans also grown accustomed and hardened to a system in which our valued legal right to a fair trial is ignored (or at least overlooked)? In a February 2010 speech on the systemic problems in the judicial system, Attorney General Eric Holder said: “As Americans [come to] understand how some of their fellow citizens experience the criminal justice system, they will be shocked and angered….”

Our public defender system derives from the Constitution’s Sixth Amendment and the Supreme Court decision in Gideon v. Wainwright. That 1963 decision ensures that any criminal defendant facing imprisonment has the right to an attorney, even if he cannot afford to retain one. The decision is premised on the notion that only an adversarial criminal justice system can produce accurate and fair results. In such a system, the prosecution and the defense should be equally matched, with each side capable of investigating, questioning and disputing the facts. But the systems that evolved out of that foundation were never robust, and today many are broken and function erratically.

This isn’t news to Michigan attorneys. A state Bar Task Force said in January 2011, of its inadequate indigent defense system,

“By almost every measure, indigent criminal defense as a whole in Michigan falls far short of accepted standards, undermining the quality of justice, jeopardizing public safety, and creating large and avoidable costs. Michigan’s public defense system has fallen far short of acceptable standards for decades and is worsening…The cost of properly fixing the system is great; the cost of not fixing it is greater.”

Effective defense of a client requires that an attorney be assigned the case more than a day before trial, that she have adequate training and supervision, that appropriate standards are met, that case loads be of a reasonable size and that resources for investigating or calling upon experts are comparable to those of the prosecution. The American Bar Association has established 10 principles, including these, for achieving a well functioning indigent defense system. These principles must not only be endorsed but also enforced.

Attorney General Holder also said that day that “…problems in our criminal defense system aren’t just morally untenable. They’re also economically unsustainable…When the justice system fails to get it right the first time, we all pay, often for years, for new filings, retrials and appeals.” He might have added that lawsuits filed by wrongfully imprisoned people result in million dollar penalties as well. The overall cost of the 13 cases profiled in the ACLU report is estimated to have been $13 million dollars.

Few people wrongly charged and incarcerated are exonerated. And while innocent people sit in jail, the real perpetrators remain free and continue to threaten the safety of the community. Michigan cannot afford to continue carelessly locking up individuals for crimes they did not commit.