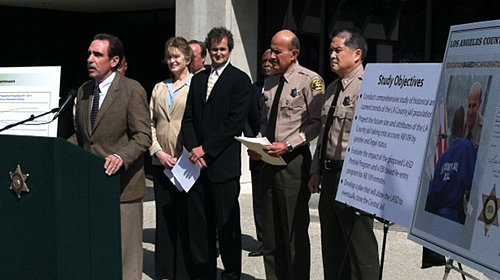 The announcement this week by Sheriff Lee Baca that he agrees with and intends to implement all 63 recommendations laid out in a new report by the Citizens’ Commission on Jail Violence is welcome news. At a press conference Wednesday, Baca said of the recommendations, “I couldn’t have written them better myself,” continuing that by implementing them, “we will be a stronger and safer jail.”

This promising development also comes on the heels of a new report on jail violence from the ACLU of Southern California, the national ACLU and the law firm Paul Hastings LLP. That report reveals how often deputies strike inmates in the head with closed fists, blunt objects like flashlights, or slam inmates’ heads into concrete wall and jail cell bars. The report, Sheriff Baca’s Strike Force: Deputy Violence and Head Injuries of Inmates in LA County Jails, was accompanied by the declaration of a nationally-recognized corrections expert, Steve Martin, who explained that head strikes often cause very serious injuries to inmates, may cause deputies to suffer broken hands, and are generally not an effective way to bring a dangerous situation under control.

The report from the Commission was even worse news for the Sheriff. The report began by stating that “[t]here has been a persistent pattern of unreasonable force in the Los Angeles County jails that dates back many years,” and went on to refute Sheriff Baca’s most recent defense that, while there were some problems with excessive force in the jails, he has taken the necessary steps to deal with the issue. In the words of the Commission’s report, “Notwithstanding the recent reforms, the Commission does not believe that the problem of excessive use of force in the jails has been ‘fixed.’”

The Commission’s lengthy report is honeycombed with findings about excessive use of force, poor policies, inadequate training and a faulty system of review of use of force incidents and slipshod discipline for those few deputies whom the department did find to have acted outside of policy. A significant number of these findings are eerily similar to those made by the ACLU in its five reports on the jails issued between 2008 and last week.

The Commission presents a careful road map for the systemic reform that will be necessary to end this longstanding pattern of abuse and lawless behavior that has corrupted the Sheriff’s Department’s custody division. Those recommendations include:

Bringing in an outsider with appropriate experience to run LASD’s custody division;
Rewriting the Department’s grossly inadequate policies on use of force;
Increasing dramatically the amount of custody training because the current level is “far below both industry best practices and training standards in other corrections systems”;
Revamping the investigation and disciplinary system; and
Overhauling the current structure of outside oversight through the creation of an independent Inspector General.

The Commission consists of prominent local leaders, four of whom are retired federal judges, and at least three of them are former federal prosecutors. The Commission, staffed by lawyers from some of the finest law firms in the nation with offices in Los Angeles, interviewed more than 150 witnesses including LASD personnel, nationally recognized corrections experts, inmates and former inmates, and civilian eyewitness to deputy abuse, including jails chaplains. Among the witnesses who testified to the commission were Esther Lim, the ACLU of Southern California’s jails monitor, who was eye witness to brutal deputy assault, and Margaret Winter, associate director of ACLU National Prison Project. Given the sterling reputation of the Commission and its staff and the exhaustive nature of its investigation, it is no longer reasonable to gainsay the scope of the problem or the need for far-reaching and systemic reform that the ACLU has been reporting on for years.

This week’s indication that the LASD intends to follow the Commission’s recommendations is a welcome departure from its tired mantra. We are pleased that the sheriff has recognized the wisdom of the Commission’s recommendations and welcome his commitment to implement them. However, we have heard about his intentions to turn things around in the past, with little to show for it. So, we intend to watch closely to make sure he keeps his eye on the ball and lives up to his commitment to implement these much needed reforms.