Yesterday’s Supreme Court Decision on Abortion Was a Great Victory for Women, but It Should Have Been a No Brainer 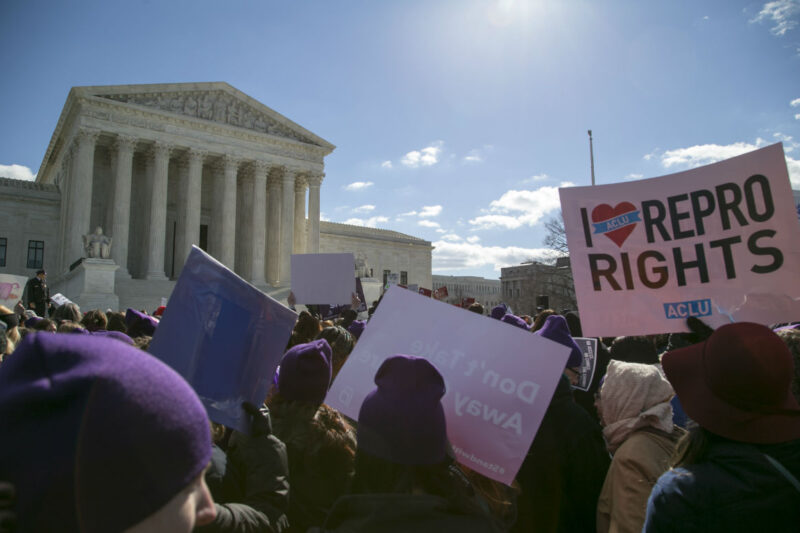 Without a doubt, yesterday’s Supreme Court decision dealt a major blow to those who want to prevent a woman from having an abortion. The court struck down two Texas laws that together would have shut down about three-fourths of the clinics in the state of Texas, leaving fewer than 10 clinics for 5.4 million women of reproductive age.

The case is rightly being heralded as a major victory for abortion rights. And it is of undeniable importance for women and families in Texas. The decision means that the clinics that were able to stay open during the litigation will be able to stay open. And hopefully some of the clinics that were forced to shut down because of this bogus law will, someday, be able to resume providing care to women. And already our cases challenging similar restrictions in Alabama and Wisconsin came to swift conclusion as a result of yesterday’s decision.

But in the midst of the all the celebration, I can’t help but ask, “How did we get here? How could a law that decimates a woman’s access to abortion for no medical reason have gotten this far?”

After all, the notion that these laws were designed to protect women has always been a sham. The leading medical experts, including the American Medical Association and the American College of Obstetricians and Gynecologists, have long said that far from making women safer, these laws actually put women at risk by forcing clinics to close. Court after court — in Alabama, Wisconsin, Texas, and Louisiana — found that there was no medical justification for these laws.

As the Wisconsin court said in striking down that state’s law, the law is “a solution in search of a problem, unless that problem is access to abortion itself.” And, indeed, the law’s supporters made no secret about the fact that access to abortion was in fact the “problem” they were seeking to “fix.” After the Texas law passed the state senate, the lieutenant governor tweeted a map showing the expected clinic closures that the law would cause, exclaiming, “We fought to pass [the Texas law] through the Senate last night, and this is why!”

Yesterday the Supreme Court recognized that the Texas laws did nothing to protect women’s health but instead just put unnecessary obstacles in the path of women who had decided to have an abortion. The court explained that it had “found nothing in Texas’ record evidence that shows that . . . the new law advanced Texas’ legitimate interest in protecting women’s health.” In fact, the court noted, that Texas admitted that it knew of no instance “in which the new requirement would have helped even one woman obtain better treatment.” As Justice Ginsburg wrote, “It is beyond rational belief that [the Texas law] could genuinely protect the health of women, and certain that the law would simply make it more difficult for them to obtain abortions.”

In my optimistic moments, I hope that politicians will heed the court’s very clear message. Laws like this that restrict a woman’s ability to make her own decision aren’t just unpopular with voters, but as today’s decision makes abundantly clear, they are also unconstitutional.

But I have been doing this work for two decades and the realist in me knows better than to hope that our work here is done. Those who oppose the right of a woman to make her own decisions about her health, her family, and her future didn’t give up after the court recognized a woman’s constitutional right to an abortion in Roe v. Wade. In fact, since that time, politicians have enacted over 1000 restrictions on a woman’s ability to get an abortion. And I don’t expect those who want to roll back a woman’s constitutional rights to give up now. Indeed, they have already announced that while they may have to tweak their strategies, they are going full steam ahead in their efforts to prevent a woman from getting an abortion if she needs one.

So we still have our work cut out for us. Today, for too many women — particularly low-income women, women in rural areas, and women throughout the Midwest and the South — the right to have an abortion is more theoretical than real. We must work to lift the barriers, like laws that withhold Medicaid coverage for abortion and laws that force women to make multiple, unnecessary trips to distant clinics and that prevent a woman from getting the care she needs.

That is why while yesterday was a day for celebration, today is a day for rolling up our sleeves and getting back to work. At the ACLU, we won’t stop until every woman — no matter where she lives and how much money she has — can get the compassionate, quality care she deserves. When we achieve that victory, we can celebrate without pausing to wonder how we got here.