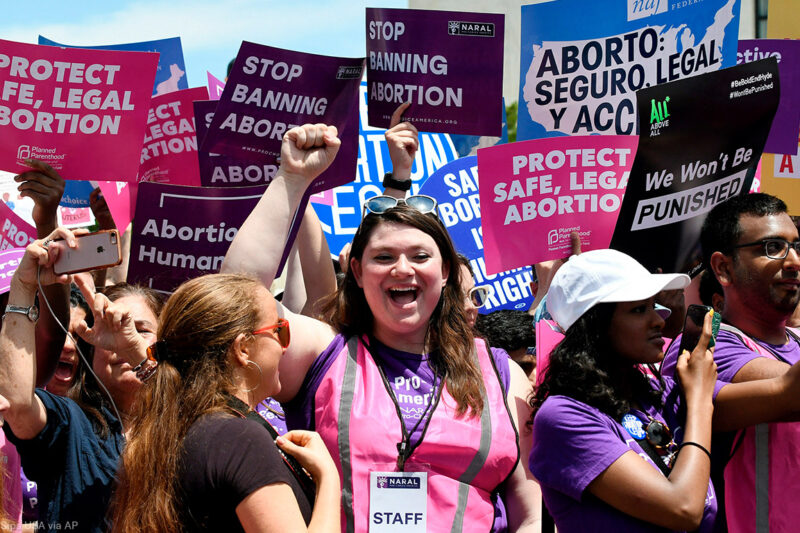 After seeing states like Alabama and Georgia pass one extreme abortion ban after another, other states are starting to push back. Last week, governors in Illinois, Maine, and Vermont signed historic bills to protect abortion rights or expand access to abortion care in their states. This follows action last month in Nevada; other states, including California, Massachusetts, and Rhode Island, may not be far behind.

Illinois’ and Vermont’s bills both recognize abortion and other reproductive rights as “fundamental,” ensuring that they will remain protected in those states, regardless of what happens to Roe v. Wade, the embattled Supreme Court decision that recognized a constitutional right to abortion. We haven’t seen such robust protections in a generation, when a similar set of state bills passed in the early 90s in response to the last existential threat to Roe.

This move is especially important in Illinois, which is surrounded by states that are hostile to abortion rights and already serves as a refuge for those who cannot obtain care in places like neighboring Missouri, where the last abortion clinic hangs by a thread.

In the meantime, Maine has enacted two new laws. The first allows qualified health care professionals like nurse practitioners to provide safe abortion care, increasing the number of publicly-accessible health centers where someone can get an in-clinic abortion procedure from 3 up to 18. The second guarantees that abortion will be covered in public and private health care plans.

This isn’t a coincidence. Activists have worked for years to lay the foundation for these wins, but the political will to push these bills over the finish line was prompted by the overreach of abortion opponents and by a desire to set up a “firewall…to protect access to reproductive healthcare for everyone,” as one bill sponsor put it.

The bigger picture is that the extreme abortion bans enacted in recent months in the Midwest and South – seven at the last count – are actually the culmination of a sustained and concerted effort to outlaw abortion throughout the country.

Over the past decade, anti-abortion lawmakers have quietly passed 479 medically-unnecessary and politically-motivated restrictions on abortion under the guise of protecting women’s health. But in reality, such measures are designed to shame patients, shut down clinics, and push abortion care out of reach.

While many of these unconstitutional laws have been struck down in the courts, the strategy has still been quite successful. Six states have only one abortion clinic left and millions of people live more than 100 miles from the nearest clinic. These abortion restrictions have stayed under the radar so as not to wake the sleeping giant that is the majority of Americans who want abortion to remain legal and available to those who need it.

But, emboldened by Trump’s appointment of two new justices to the Supreme Court, anti-abortion politicians could not maintain their façade any longer. They are now openly passing bans in the hope that their state’s law might be the vehicle the Supreme Court ultimately uses to overturn Roe.

However, their shift in strategy has meant that everyday people are now starting to understand the very real threat that exists – 72 percent of respondents in a recent poll said they believe the right to abortion is at risk in this country.

And they are fighting back.

Last month, tens of thousands of people took to the streets at more than 500 events in every state to express their outrage over these extreme bans. And just last week, more than 180 companies, whose workforce totals over 100,000 employees, signed a “Don’t Ban Equality” pledge in support of legal abortion. There also has been a surge in donations to abortion funds that help people get the care they need.

Lawmakers, in turn, are heeding the call – and not just progressive ones. Vermont’s bill was signed by a Republican governor, a reminder that this issue need not be so partisan and a sign of the potency of this current political moment.

While these victories should be celebrated, our rights should not depend on where we live and no one should have to travel out of state to get the care they need. For now, abortion is still legal in all 50 states and we must fight to make sure it stays that way.

At the same time, we can continue to shore up state protections in order to safeguard the important, personal decision of whether to have a child; defend the rights of pregnant people at a time when the stakes have never been higher; and ensure a future in which health needs, not politics, always dictate the care a person receives.