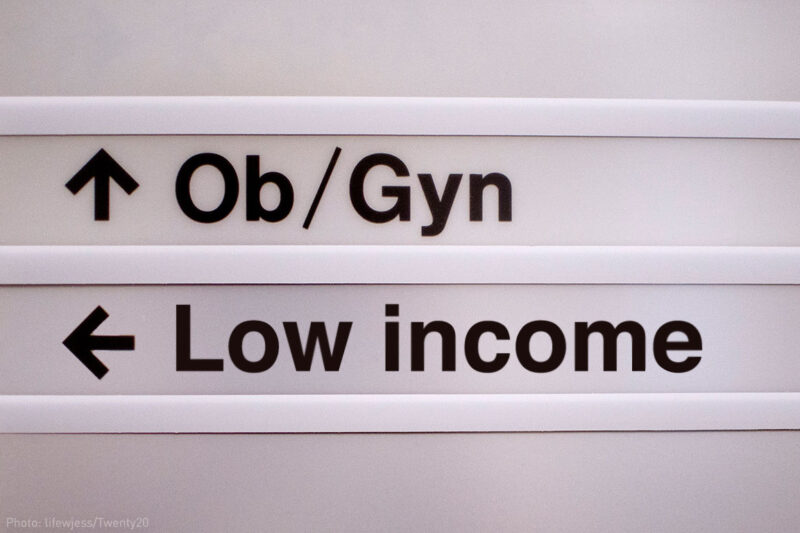 Last week, Lori Szala the national director of client services for the Human Coalition, wrote an op-ed in The New York Times attempting to deny a connection between the availability of abortion and the economic well-being of women and families. Ms. Szala claims that linking abortion and economics “reduces mothers and their children to mere economic objects.” Abortion, she writes, is society’s “way of avoiding grappling with the fundamental injustices driving women to abortion clinics.”

It would be easier to take her argument seriously if Ms. Szala didn’t work for an organization whose mission is to outlaw abortion. Nonetheless, she is right in saying that our society must do far more to support pregnant women and families. Parenting should not be a privilege reserved for the wealthy—but neither should abortion care. Further, it’s just plain wrong to deny, as Ms. Szala does, that preventing a woman from getting an abortion if she wants one has real economic consequences. There is no getting around the fact that when a woman can’t complete her schooling or loses her job because she needs to stay home with her child, she and her family suffer economically.

No woman who wants to become pregnant, continue a pregnancy, adopt a child, or otherwise grow her family should be pressured or prevented from doing so because she’s worried that she won’t be able to provide that child with basic necessities. At the same time, we must be honest about the economic pressures pregnant and parenting women face and ensure that each woman has access to the full range of reproductive health care she needs to make the decisions that are best for her, her family and her future.

Unfortunately, some federal and state lawmakers are trying to pull the rug out from under women and families: They’ve refused to raise the minimum wage to keep up even with inflation, and they’ve gutted health, education, nutrition, and housing programs families need to live with health and dignity.

Those same politicians, whose are making it harder and harder for women with kids to make ends meet, are the very ones who are also pushing abortion out of reach, leaving many women in an impossible double bind. A woman who wants to continue a pregnancy must contend with lack of family-leave policies, poor child-care options, unaffordable housing, a health insurance system that is currently on the chopping block and more. (The healthcare bill recently passed by the House allows insurance companies to deny maternity care and attempts to prevent insurers from covering abortion, and the Trump administration has indicated that it would like to allow employers a free pass to block their employees’ right to coverage for birth control.)

At the same time, a woman who has decided to end her pregnancy may be blocked from that care by needless restrictions that shut down clinics and bans on abortion coverage as well as other policies designed to shame, bully, and punish women for abortion. And all of these policies fall hardest on those struggling financially, who are more likely to be women of color, immigrants, younger, and LGBTQ.

Szala’s attempt to deny the connection between abortion access and economic security runs counter to women’s lived experiences and the facts. Research shows that a woman who wants to get an abortion but is denied it is more likely to be in poverty years later than one who can get an abortion.

There are two problems here. The first arises when a woman’s decision — which she alone is best positioned to make — is thwarted by politicians, and she’s forced onto a path she didn’t choose for herself. For example, restricting Medicaid coverage of abortion forces one in four poor women seeking abortion to carry an unwanted pregnancy to term.

It’s an extraordinarily challenging landscape for women who are trying to make and carry out decisions about pregnancy, our families, and our futures. It can sometimes feel like we’re damned if we do, damned if we don’t. But that’s why we keep fighting. That’s why we fight for the right of each woman to make her own decisions about pregnancy and parenting, get abortion care when she needs it, continue a pregnancy if she wants to, and raise children with dignity.

That’s also why in addition to reproductive freedom, the ACLU works for racial justice, voting rights, immigrants’ rights, economic justice, and more: Because women are more than any one aspect of their lives. Supporting women and families means ensuring that income doesn’t determine access to basic human rights.

We should all work toward a world where economic pressures don’t factor into a woman’s pregnancy decisions. But we’re not there yet — and wishing it was otherwise won’t make it so. We’ll get there by continuing each day to fight for women and families and a better future for us all.