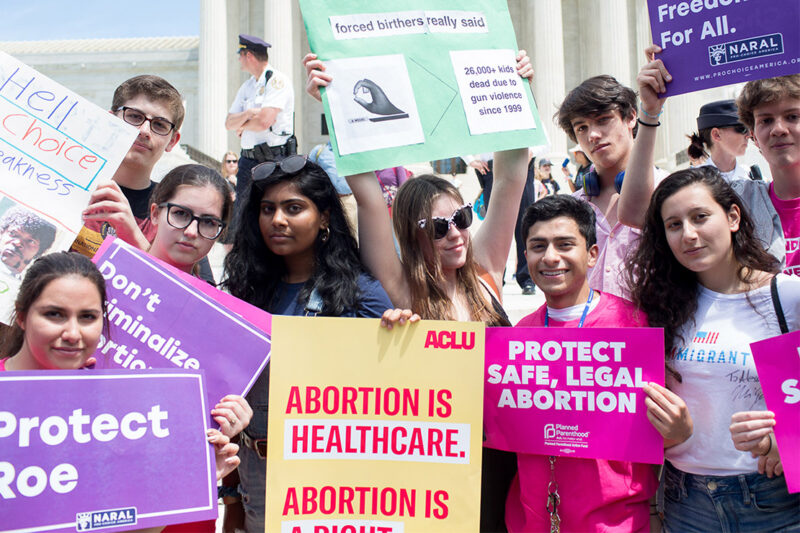 The administration passed a new rule that would impose more than $1 billion in unnecessary costs in an effort to coerce insurance companies to stop offering coverage for abortion.

From denying access to abortion for unaccompanied immigrant minors, to gutting the Title X family planning program, to trying to roll back the Affordable Care Act’s requirement that employers and universities cover contraception in their health plans, the Trump administration has spent the last three years waging an unrelenting, targeted campaign against reproductive freedom. And the administration does not appear to be losing steam. Indeed, just last month, Donald Trump became the first president to address the annual anti-abortion march in D.C.

Well, we aren’t losing steam either. We have sued the administration time and time again over its policies, including those detailed above. Today, we filed a lawsuit challenging the administration’s latest (and possibly most under-reported) attempt to undermine reproductive rights to date: a new rule that would push abortion further out of reach for millions of people across the country by coercing insurance companies to drop abortion coverage from individual insurance plans.

In late December 2019, the administration released the new rule that would force insurance companies that sell plans in the Affordable Care Act individual marketplaces to separately bill — and instruct customers to separately pay – for coverage of abortion services. This means insurance companies will have to send two separate bills to each customer — one for the coverage of abortion care, and another for coverage of all other health care. They will also have to instruct their customers to pay the bills using two separate transactions. In other words, each consumer will have to send two checks or two money orders, or complete two separate online transactions.

This rule isn’t just about creating more bureaucratic red tape for the sake of it. Making it more complicated and costlier for insurance companies to cover abortion will have very real and devastating effects on the availability and affordability of health insurance (and, by extension, health care) for 3 million consumers across the country. This includes our four brave consumer clients: Rebecca, a small business owner in D.C.; Kirsty, a barista in Maryland; Mariel, a waitress and grad student in New Jersey; and Tanja, an artist in Maine.

Like many other consumers across the country, Rebecca, Kirsty, and Mariel all live in states that do not require insurers to cover abortion in individual plans sold on the marketplaces, which means that the rule could cause their insurers to drop abortion coverage from their plans altogether. If they lose coverage and need access to abortion, they will be forced to find a way to pay out-of-pocket for that care, which can cost hundreds of dollars or more.

Our fourth client Tanja knows this all too well. She lives in a state that requires insurers to provide abortion coverage, but when she needed an abortion a few years ago, she was forced to travel out of state, and her insurance would not cover her abortion. As a result, she had to pay for the entire procedure out-of-pocket, using up nearly all of the remaining balance she had on her credit card. While she was able to scrounge up the necessary financial resources at the time, she joined our lawsuit to fight the Trump administration because she knows just how burdensome (and, for some, impossible) it can be to have to figure out how to pay for an abortion on top of navigating the myriad other barriers to accessing care.

Even if Rebecca, Kirsty and Mariel are able to retain their abortion coverage, they, alongside Tanja, are worried about their ability to afford any rule-related increases in their premiums. For Mariel, who makes only slightly more than the maximum income eligible to qualify for Medicaid and is barely able to afford her premium payments now, even a small increase could force her to switch to a plan with a higher deductible and less coverage. This is not an unfounded concern: HHS has acknowledged that the rule will lead to increases in consumer premiums of up to one percent annually.

Our clients are also worried about the confusing new separate billing and payment requirements under the rule, which could put them at risk of losing their insurance coverage entirely as a result of accidental non-payment — yet another consequence the Trump administration acknowledged when they issued this policy. Any resulting coverage lapse would take a particularly catastrophic toll on consumers like Rebecca and Kirsty, who have pre-existing medical conditions that require consistent access to health care. And, like many of this administration’s policies, the new requirements will hit already marginalized groups the hardest, including people with disabilities and with limited English proficiency who may already struggle to navigate the health care system.

The Trump administration’s rule is just another attempt drive up the costs and burdens associated with accessing abortion to prevent people — especially those with the fewest resources — from obtaining abortion care. We will not stand by and watch as millions of consumers across the country have their health care needs trampled by the administration’s anti-abortion agenda. Alongside our brave clients, we will fight for every individual’s right to safe, affordable, comprehensive reproductive health care, including abortion.