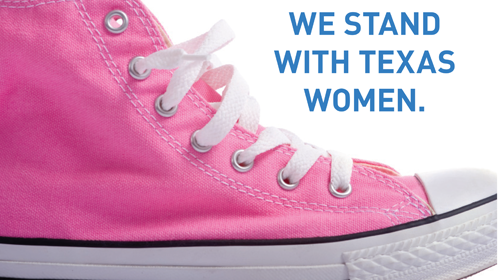 Last week, when Wendy Davis stood for over 13 hours to filibuster a sweeping anti-abortion bill, some suggested that Davis is a modern Wonder Woman. Millions of us watched – proud, inspired, awestruck – into the wee hours of the morning last week, as advocates for women’s health stood up for the women of Texas.

And we did it – we won for a short time. But it’s time for us to stand up again. Governor Perry called another special session that starts today, and the bill that threatens to shut down most every abortion clinic in the state is on the agenda.

The fight is not over. Politicians in Texas are trying again to turn back the clocks on women’s health care, despite the fact that the people of Texas have said NO to this legislation time and time again. The people of Texas don’t want politicians to play doctor when it comes to women’s health care. Women don’t turn to politicians for advice about mammograms, pre-natal care or cancer treatments and they feel strongly that politicians should not be involved in personal medical decisions about their pregnancies.

Wendy Davis and her colleagues showed incredible courage when she stood for almost 13 hours, forcing the Senate to listen to testimony they refused to hear during the legislative process. But she stood, literally, to stand up for us – for women across Texas, and America, who would have been hurt by this bill. And when she was thwarted, we raised our voices. We raised our voices to be clear that we DO in fact want what she was asking for, what the constitution promises us, and what we deserve: autonomy, responsibility, and the privacy to make our own decisions. We picked up a little Wonder ourselves, and now is the time to use it.

Rally on the South Steps of the Texas Capital today – July 1, from noon to 1 pm central time. Or stand with us from wherever you are.