Her Service and Sacrifice Demand Fairness and Equal Treatment from Congress 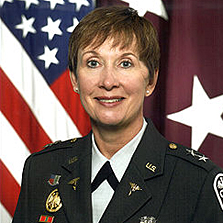 Even during these partisan times in Congress, and yes, even on an issue, like abortion, that sparks debate, we should agree that women serving in the military deserve the same reproductive health care coverage that other women have in America. Unfortunately, that’s not the case. If our brave women are willing to protect our freedoms, we should protect their freedoms as well.

Although now retired, I served for over 30 years culminating as the Acting Surgeon General and Commander of the Army Medical Department and the 22nd Chief of the Army Nurse Corps. I take great interest in issues affecting the health of the men and women in our armed forces who defend our country and our Constitution.

A servicewoman who has been victimized by rape does not have health insurance coverage should she decide to terminate a resulting pregnancy. Current law allows coverage of abortion only when the woman’s life is endangered. I, and no doubt many others, am disheartened that our servicewomen and military wives and daughters lack the same insurance coverage civilian women have during such a traumatizing period of their lives. Federal employees — including any member of Congress and his or her family member — along with women in prison and women enrolled in Medicaid are appropriately shown compassion and provided access to care. But not women in uniform or the loved ones of men in uniform. To them, Congress has said, “you’re on your own.”

The existence of the current policy boggles the mind. There is simply no justification for providing these women patriots less care than civilian women. The policy is shameful. Worse, it is disrespectful of the service and sacrifice of every military woman.

Last week, Senator Jeanne Shaheen (NH) introduced an amendment to the National Defense Authorization Act that would rectify this problem and restore basic fairness, enabling servicewomen to have the same health coverage as other women already do.

This is not a tough issue; it isn’t controversial. Current government health programs cover abortion in cases of rape and incest. Similarly, the abortion restrictions in the recently enacted Patient Protection and Affordable Care Act also provide exceptions for survivors of rape and incest. Although Congress hotly debated the contours of those restrictions, access to abortion care for sexual assault survivors was never even questioned. As divisive as the question of abortion has unfortunately become, an overwhelming majority of Americans have the grace and empathy, in the face of violent sexual assault, to allow a woman to make the decision that is best for her and her family. Why haven’t members of Congress done the same when it comes to our military women and families?

So I support the Shaheen Amendment and the senators who have co-sponsored it. But I also know that this past May, the House of Representatives had the opportunity to remedy this grievous wrong and it failed to act. In fact, it suppressed even a debate of the issue. The Senate must do better. Our women in uniform deserve nothing less.