"Get out of my doctor's office" is right! 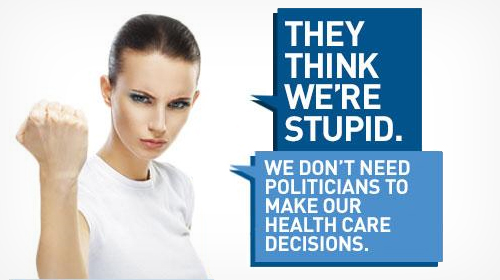 By now, I’ll bet you’ve seen the ad. The creepy one. With the young woman visiting her doctor for an annual well-woman exam. After being led to the exam room, the woman waits in stirrups for her doctor to arrive. Then she’s horrified when a cartoonish “Uncle Sam” pops up from between her legs to provide her care. The ad ends after the words “don’t let government play doctor” flash across the screen.

Note: the ad encourages viewers not to purchase health insurance through the new exchanges set up under the Affordable Care Act. And press is reporting the ad is being pushed out by “a conservative group funded by billionaire brothers Charles and David Koch,” who have also “funded a number of conservative advocacy groups” that have been supporting abortion restrictions across the country.

Are you f@!#ing kidding me? NOW? Now these people want government out of our doctors’ offices? Since when are they concerned about the government sticking its hands in the wrong places? What did they think banning insurance coverage for abortion did? Or requiring abortion providers to increase the size of their hallways? Or forcing a woman to view an ultrasound image of her pregnancy before she can get an abortion? Or, last but not least, banning abortion outright after just a few weeks of pregnancy?

ABORTION RESTRICTIONS LIKE THESE PUT GOVERNMENT DIRECTLY IN BETWEEN A WOMAN AND HER DOCTOR.*

The hypocrisy is dumbfounding.

If they do, it’s time to prove them wrong. Tell them you don’t want politicians playing doctor. Tell them the extremist campaign to shut down women’s health clinics and block access to abortion care has to end. We need to trust women to make the personal, private decisions that are free from political interference. Join us now.

*(Not to mention the fact that the ad is opposing a law that would in fact give a woman greater access to her doctor.)