Beyond the Bans: State Attacks on Abortion in 2021 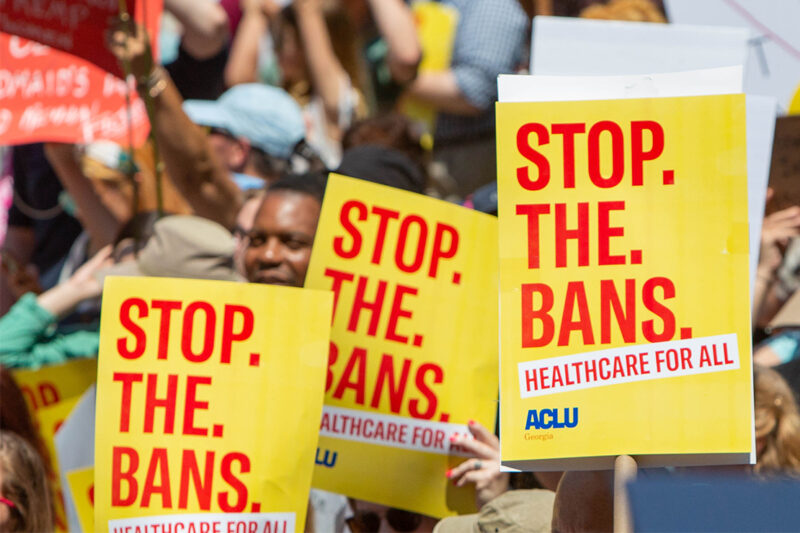 In the first months of 2021, two states passed abortion bans, and several more could soon join them. But there are also more subtle and nefarious restrictions on the horizon — bills that will push abortion out of reach without explicitly banning it.

Update: On June 24, 2022, the U.S. Supreme Court issued a shameful ruling overturning Roe v. Wade. Learn more about how the ACLU continues to fight for abortion access and what steps you can take here.

Despite being a year into a global pandemic that has caused a staggering half a million deaths in the U.S, many state legislatures still have their sights trained on a favorite target: decimating access to abortion care.

In 2020, most states — with some notable exceptions — shifted their attention to addressing the pressing needs created by COVID-19. But now, anti-abortion politicians are returning to their prior obsession: interfering with people’s personal medical decisions. By the end of February, states had already introduced 384 anti-abortion measures and enacted eight abortion laws.

In many ways, this year will feel like a re-play of 2019, when 8 states passed bans on abortion from the earliest days of pregnancy. Thus far, South Carolina has passed a 6-week ban (already blocked in court) and Arkansas’s governor just signed a total ban. Other states could soon follow suit.

Beyond the bans, however, are more subtle and nefarious restrictions on the horizon — bills that will push abortion out of reach without explicitly banning it.

This has long been the strategy of anti-abortion extremists: chip away at abortion access while leaving the legal right in place, even if in name only. That strategy shifted, however, in 2019 when abortion opponents began to hope the Supreme Court would use a near-total ban to overturn Roe v. Wade. Now, they are pursuing both strategies simultaneously.

While we’ve seen many of these restrictions before, this year has brought new variations. Already, several trends are emerging.

The first is related to medication abortion. Anti-abortion politicians already promote the dangerous myth of “abortion reversal,” forcing providers to tell patients they can stop a medication abortion mid-course and continue their pregnancy. But now, in Alabama, Arizona, Arkansas, Kentucky, Montana, and Oklahoma, they are considering bills that could prevent people from getting medication abortion at all.

Mifepristone, medication used for early abortion and miscarriage care, is safe and effective, demonstrating a stellar safety record in the 20-plus years since it was approved by the Food and Drug Administration. But it is still subject to medically unnecessary federal regulations — regulations that we are trying to get lifted — that make it far harder to access than it should be. State restrictions compound these barriers and abortion opponents are now seeking to make them even worse.

The second trend involves bans on abortion if even part of a patient’s reason might be based on the sex or race of the fetus or a fetal diagnosis. Previously, some states had singled out Down syndrome, making it illegal for doctors to perform an abortion if they have reason to know that diagnosis was a factor the patient’s decision — and we’ve challenged such laws in Tennessee and Ohio. But this year, states are increasingly looking to ban abortion whenever any kind of fetal diagnosis may be involved, as Arizona, Arkansas, Florida, South Carolina, West Virginia, and Wyoming may do.

These measures cynically attempt to exploit the fight for disability and other civil rights, pitting them against the fight for reproductive freedom. Let’s be clear: these laws do nothing to address the ableism people with disabilities face — or the discrimination against any marginalized group — in education, housing, and health care. They are simply a ploy to block access to abortion care.

Lastly, Arizona, Kentucky, Missouri, and Tennessee currently have bills that would require fetal tissue from an abortion to be buried or cremated, and in some cases receive a death certificate. We just filed suit against a law like this in Ohio. Such laws are cruel and entirely unnecessary, searching for a solution to a problem that doesn’t exist. They do nothing to respect or support a patient’s decision; instead, they impose intrusive mandates on abortion patients, regardless of their own wishes.

Because of racism and structural inequality, these types of restrictions — along with the hundreds of other medically-unnecessary restrictions that have been introduced — will fall hardest on people of color, low-income people, youth, immigrants, LGBTQ people, people in rural areas, and other marginalized communities.

And yet, some states are fighting back, acting to ensure the right to abortion remains protected within their borders, no matter what happens to Roe. Just last month, New Mexico passed legislation to repeal a 1969 abortion ban, removing the threat that it could go back into effect — an essential safeguard for a state that already provides a haven to those who cannot access care in their home state. It’s the second state, after Massachusetts, to move to protect reproductive freedom since Justice Ginsburg passed away last year.

Hoping to build on this momentum, in New Jersey, activists are pushing forward a comprehensive Reproductive Freedom Act to protect and expand access to a wide range of reproductive health care. And Delaware just introduced a bill to decriminalize abortion and ensure that no one can be prosecuted for ending a pregnancy.

In these uncertain times, one thing is certain: states will continue to be at the center of the fight over abortion. But the right to abortion — just like any other right — shouldn’t depend on where you live. This pandemic has both laid bare and exacerbated the health and economic disparities that are rampant in this county. Together, we will keep working to ensure everyone can access the health care they need, build the families they want, and make their own decisions about their lives — without stigma, shame or political interference.