The Anti-Abortion Agenda Explained (Here's a Hint: It's Not About Women's Safety) 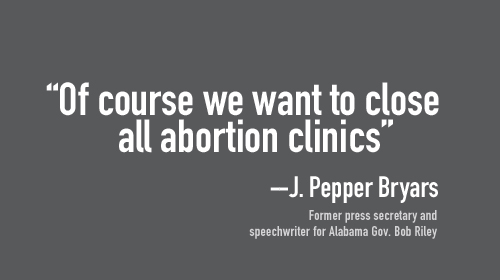 During the current legislative session, more than 300 provisions were introduced across the country to prevent access to abortion, including some of the most severe abortion restrictions we’ve ever seen. For months, we have been lamenting that these extremist politicians must think we’re stupid if they think we won’t realize that their legislative maneuvering is part of a coordinated, national plan to outlaw women’s health clinics and cut off access to abortion care.

Well at least one former political operative is willing to come out and say the truth – abortion opponents’ true goal is not to make abortion clinics safer, but to close all abortion clinics.

In a recent op-ed published in the Huntsville Times, J. Pepper Bryars, the former press secretary and speechwriter for Alabama Gov. Bob Riley, writes about an Alabama state law that places onerous and medically unnecessary restrictions on abortion providers. In defending that law he quotes a representative from Planned Parenthood Southeast:

“‘The true goal of the law is to make all abortion illegal and inaccessible in Alabama,’ said Nikema Williams, vice president of public policy for Planned Parenthood Southeast, when the Alabama bill passed last April. Despite all the talk about ensuring the facilities are safe and well-regulated, Williams and others believe the true goal is to close the state’s abortion clinics.”

Bryars’ response: “Of course it is.”

Finally an honest politician! Or at least an honest former political aide.

Bryars goes on to say:

“Our goal should remain, as Williams said, to make all abortion illegal and inaccessible in Alabama. And our strategy and arguments should always support that long-term goal…”

Bryars’ cool and clear admission of the true goals of the anti-abortion strategy stands in stark contrast to misleading public arguments abortion opponents often make. For example, when Dan McConchie, vice president for legislative affairs of Americans United for Life, is quoted saying: “stricter regulations of doctors and facilities represented a genuine effort to ensure that if clinics are going to operate, they operate to high standards that protect women’s health and safety,”, we can infer that their true concern is less about women’s safety and more about returning us to a time when abortion was inaccessible in this country. In fact, McConchie’s organization has offered sample regulatory laws to state legislators all over the country, including those in Alabama that aim to close down clinics providing safe and legal abortion. Groups like McConchie’s and pundits like Bryars have a strategy: Pass laws that make it harder and harder for women’s health clinics to stay open and make it more difficult for women to obtain the care they need no matter what their circumstances.

Bryars concludes his piece by again crystalizing the extreme intentions of his cohorts:

“Today there are only five abortion providers left statewide, and the goal of the pro-life movement should remain to support every alternative, enact every restriction, create every obstacle, until the number of abortion providers in Alabama falls to the only acceptable number – zero.”

The ACLU along with the ACLU of Alabama, Planned Parenthood Federation of America, and Planned Parenthood Southeast, are working hard to ensure Bryars’ vision goes unrealized. We filed a lawsuit challenging the Alabama law and, on June 28, a federal judge issued a temporary restraining order, preventing it from taking effect.

While we will continue to fight in the courts against extreme measures like the law in Alabama, we cannot rely on the courts alone to protect a woman’s ability to obtain abortion and other reproductive health services like birth control. With your help, we can show the Bryars of the world that we are well aware of their extreme anti-abortion agenda to outlaw abortion in this country and thanks, but no thanks. Let’s prove to him that we can and will hold firm against these dangerous laws and policies. We see what is happening and we want it to stop.