Abortion Rights are on the Line in New Mexico’s Primary 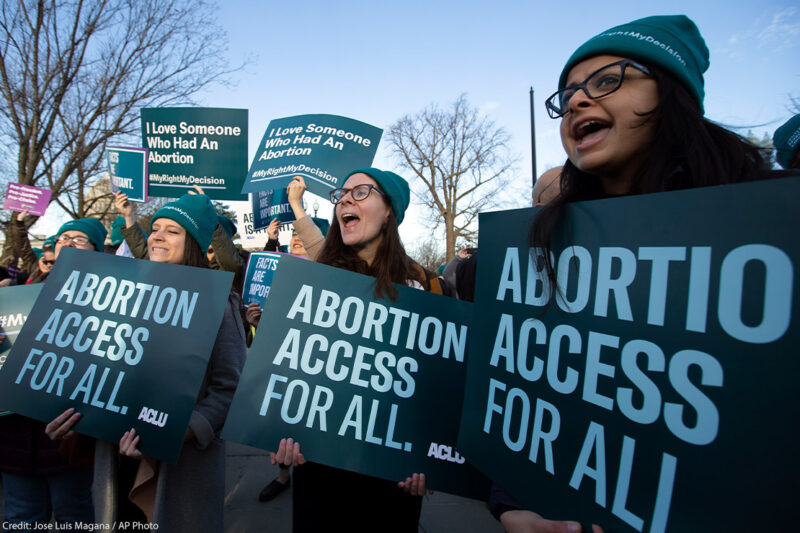 No one should fear being charged with a crime for seeking healthcare.

Abortion is still legal in all 50 states, but if the past year has taught us anything, there is no guarantee it will stay that way. Should Roe v. Wade, the Supreme Court decision that legalized abortion, be overturned, several states — including New Mexico — still have abortion bans on the books that could go back into effect. In the case of New Mexico, a 1969 law that is mostly unenforceable could make abortion care a felony in almost every case.

This old abortion ban would require patients — including survivors of rape and incest — at any stage of pregnancy to beg for permission to have an abortion in front of a panel of strangers. Any person who performs an abortion outside of this inhumane process could be charged with a felony. People receiving this care could also be investigated and charged. This burden falls more on people of color, young people, those with limited income and LGBTQ+ communities when abortion is banned.

We want to change that. We came close to getting rid of the old abortion ban this past year with a narrow loss in the legislature. The bill had the support of reproductive freedom champions in both the House and the Senate and the governor had already committed to signing it. But after several key senators voted to keep the ban on the books, the measure failed by three votes.

We have heard loud and clear from our members and supporters across the state that protecting abortion rights is one of their top civil liberties priorities. So we decided to expand our advocacy effort and use the opportunity of the upcoming primary on June 2 to educate voters on this issue.

Over the final two weeks of the election, we will reach more than 25,000 likely Democratic primary voters in two key districts, Senate District 28 and 30. Our effort includes phone banks and texting, as well as a significant direct mail effort and a digital persuasion and get out the vote ad campaign — a steady drumbeat of information comparing the candidates’ abortion rights positions. Our goal is simple: To protect the right to and accessibility of abortion in New Mexico no matter what happens at the federal level.

Reproductive freedom and abortion rights are under unprecedented attack throughout the country. The protections guaranteed by Roe v. Wade have already been gutted in many ways, and other states have passed at least 483 abortion restrictions in the past decade with one goal in mind — to push abortion care out of reach, pushing pregnant people to seek care in other states. This makes New Mexico an important leader in reproductive health care throughout the Southwest and the country. We fear it’s only a matter of time before the Supreme Court acts to completely dismantle the remaining protections and we can’t risk losing critical abortion access for even one day in New Mexico. This is a distinct and urgent risk for New Mexicans, and it cannot be ignored.

Because of the elected officials who voted to keep this outdated law, the threat and stigma of a potential criminal investigation, arrest, and prosecution for medical treatment continues to hang over patients and their healthcare providers. On June 2, New Mexico voters will be able to use their ballots to prevent this dystopian future from ever becoming reality, and ensure abortion rights remain protected in our state no matter what happens at the federal level.

Paid for and authorized by American Civil Liberties Union, Inc.