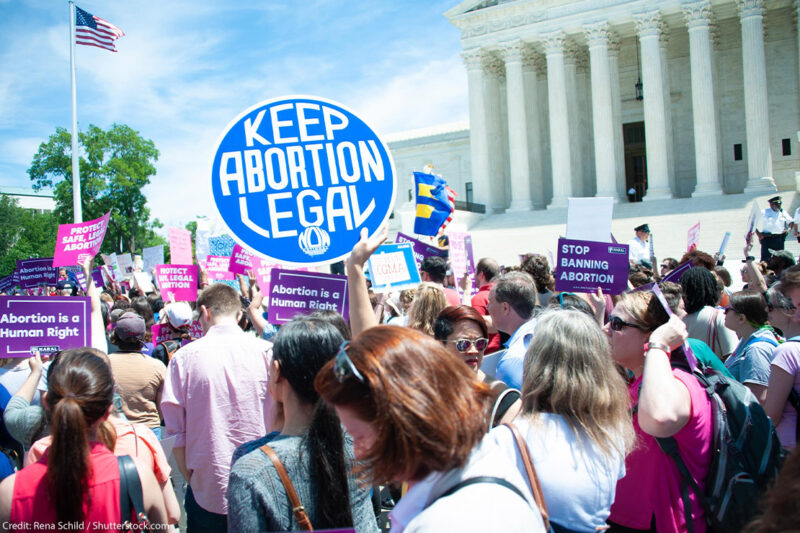 As we commemorate the anniversary of the landmark Supreme Court case, the fight for abortion access continues. Here's how it will play out in 2020.

Today we commemorate the 47th anniversary of Roe v. Wade, the landmark Supreme Court case that recognized a constitutional right to abortion. In the nearly five decades since, the decision has weathered numerous storms and faced plenty of erosion, leaving too many without meaningful access to abortion care. But 2020 could be its most consequential year yet.

This spring, the Supreme Court will hear arguments in June Medical Services v. Gee and could uphold state abortion restrictions identical to ones it struck down only four years ago, thereby allowing states to continue shutting down abortion clinics with no medical justification. Unsatisfied, 207 abortion opponents in Congress have asked the Court to overturn Roe entirely and pave the way for states to ban abortion outright.

But while this high-stakes showdown plays out at the Supreme Court, we cannot take our eyes off of the states. In 2019, seven states throughout the South and Midwest tried to ban abortion (all have been blocked thus far) while seven other states passed eight affirmative measures to protect and expand access to abortion. This year will include new threats, as well as new opportunities to build on recent victories.

The attacks on abortion are mounting quickly. Already in 2020, bills that would ban abortion from the earliest days of pregnancy — like those passed in Georgia and Alabama last year — have been introduced in 13 states, with more likely to be filed in the coming days and weeks. Not all will advance, but there is a genuine risk that at least five more abortion bans could be enacted this year.

Less aggressive but equally harmful and extreme measures are also being considered: a Florida bill that would force young people to obtain parental consent for an abortion, which would increase risks to vulnerable youth; bans on the standard of care for abortion after 14 weeks in Michigan and Nebraska; and an Ohio measure that promotes the dangerous and unproven theory that an abortion with pills can be “reversed.” Additionally, abortion opponents are taking steps to eliminate abortion protections or pass new restrictions via ballot measures in Colorado, Kansas, Kentucky, Louisiana, and elsewhere.

But it’s not all bad news. Many states are fighting to protect and expand reproductive rights. Inspired by the bold actions of Illinois, Maine, New York, and others, more states are gearing up to ensure access to abortion no matter what happens at the Supreme Court.

Massachusetts is working to pass the ROE Act, which would, among other things, improve youth access to abortion and ensure coverage for abortion regardless of income or immigration status. In the wake of an historic election in Virginia, legislators are lining up to show their support with a bevy of proactive bills. And New Jersey Gov. Phil Murphy recently called for efforts to codify reproductive rights in state law.

The reality is, however, that we will never break free from the relentless cycle of harmful state laws and court battles without federal action by Congress — which is why we are joining calls for Congress to pass the Women’s Health Protection Act. Already supported by more than 200 co-sponsors in the House and 42 in the Senate, WHPA would prohibit states from shutting down abortion clinics and banning abortion outright. A nationwide safeguard against the breathtaking scope of medically-unnecessary abortion restrictions states have passed to delay and obstruct access to care would be a critical step toward making the right to abortion a reality for all people, no matter where they live.

But it’s not enough to keep clinic doors open. We must also ensure that people can afford to access the care they need by working to eliminate coverage bans like the Hyde Amendment that for far too long have pushed care out of reach for low-income people.

Recent polling shows that a majority of voters support coverage for abortion for people enrolled in Medicaid — and support is steadily building in Congress for the Equal Access to Abortion Coverage in Health Insurance (EACH Woman) Act, a bill to end restrictions on abortion coverage in government insurance programs and stop political interference with private insurance coverage of abortion. Presidential candidates have likewise committed to ending the Hyde Amendment in response to sustained pressure from dedicated activists, including ACLU volunteers working through our Rights For All campaign.

The Roe anniversary is an important milestone, but we can’t ignore the fact that continued attacks on abortion rights still leave countless people without adequate protections. Whatever twists and turns we may encounter in the coming year, the ACLU will keep fighting to fulfill Roe’s promise.