The Biden Administration’s Religious Freedom To-Do List: Recommitting to Religious Liberty for All. 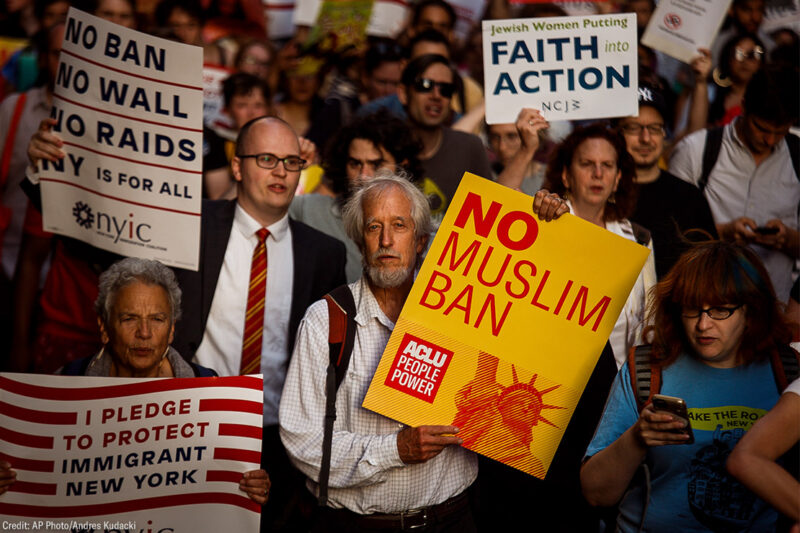 Over the last four years, the Trump administration has embraced a distorted view of religious freedom that is rooted in bigotry against minority faiths and atheists and promotes an official preference for Christianity. They’ve targeted Muslims for no reason other than rank prejudice and favored certain types of Christians in law and policy, with no regard for the harms those actions have inflicted on everyone else. President-elect Biden and his administration must make restoring religious liberty for all and protecting the separation of church and state among their top priorities.

Here are just a few of the many actions that should be at the top of the Biden administration’s religious-freedom to-do list:

Within days of taking office, President Trump signed an executive order banning foreign nationals from seven predominantly Muslim countries from visiting the United States and prohibiting refugees from entering the country. The order followed through on Trump’s bigoted promise as a candidate to enact “a total and complete shutdown of Muslims entering the United States.” Although the ban’s terms and criteria shifted slightly over time as the administration tried to defend it in court, the Supreme Court upheld the ban and that shameful policy remains in place today.

President-elect Biden must fulfill his campaign promise to rescind the Muslim ban. He must also rescind all related policies that resulted from these orders and abused the same legal authority. That won’t be enough, however, to redress the deep pain and exclusion that President Trump and his administration have inflicted on Muslim communities. The administration’s discriminatory policies and hateful rhetoric ushered in a renewed era of open hostility and violence toward Muslims (and many other marginalized communities). From day one of his presidency, President Biden must denounce all efforts to target or discriminate against Muslims and those of other minority faiths, and he must ensure that Muslims receive the same treatment and access to our immigration system as everyone else.

The Trump administration has proposed or adopted numerous policies that treat religious freedom as a license to discriminate, no matter the harm to others. In October 2017, the Department of Justice issued religious-liberty guidance for all executive agencies, declaring that federal law “might require an exemption or accommodation for religious organizations from antidiscrimination law … even where Congress has not expressly exempted religious organizations.” In fact, the ultimate federal law — the U.S. Constitution — has long been understood and interpreted to prohibit religious exemptions that impose harm on others, in part because these exemptions violate the separation of church and state by elevating some faith beliefs over the rights of others.

But that hasn’t derailed the Trump administration’s effort to gut health care protections by enacting rules that allow any health care worker to
refuse care to patients based on the worker’s personal religious or moral objections, or permit any employers to deny their employees contraception coverage. Nor has it stopped the administration from giving special privileges to certain religious groups by, for example, proposing or implementing rules that allow federal contractors with the Department of Labor to discriminate against LGBTQ employees and others, or that make it easier for federally funded social services providers to turn away religious minorities and LGBTQ people, all based on the contractors’ and providers’ religious beliefs.

The Trump administration has even gone so far as to argue in the Supreme Court that religious groups contracting with the government to provide foster care services for children should be able to discriminate against prospective LGBTQ foster parents—potentially opening the door to all manner of discrimination by those performing core government services with taxpayer dollars. And it has argued that the First Amendment protects the ability of businesses to turn away same-sex couples based on the business owners’ religious beliefs. In other words, the Trump administration has advocated for a far-reaching constitutional right to discriminate.

The Biden administration must take every action necessary to reverse these positions, which misinterpret religious liberty to enable discrimination and undermine our basic rights to be treated equally. It must immediately rescind the DOJ’s 2017 religious freedom guidance and withdraw all proposed and non-final regulations permitting discrimination based on religious beliefs against LGBTQ people and people seeking reproductive care.

Recommit to the separation of religion and government

President Trump and his administration have demonstrated a sweeping, dangerous contempt for the separation of church and state. The right to believe what we want and to exercise our faith, so long as we’re not harming others, is unquestionably a fundamental component of religious freedom. But the First Amendment also guarantees, through the Establishment Clause, an equally vital aspect of religious liberty: the right to be free from governmental imposition and promotion of religion.

Our government represents us all and should remain neutral on matters of faith. Instead, President Trump continually singled out and discriminated against Muslims and privileged Christian beliefs over the rights of others. He encouraged public schools to teach biblical doctrine. His Secretary of State, Mike Pompeo, used government resources to deliver a sermon, called “How to be a Christian Leader,” to a religious organization. And Attorney General William Barr has repeatedly railed against atheists and others who do not share his Christian beliefs, accusing them of being immoral and plotting the “organized destruction” of religion. Under Barr’s leadership, and his predecessor, Jeff Sessions, the Justice Department also has repeatedly taken positions in court cases that undermine the separation of church and state. This includes arguing, for example, that a state should be required to fund religious education at private schools and that the government should be allowed to display a 40-foot Latin cross on public property.

The Biden administration must recommit the executive branch to defending the separation of religion and government. It must show robust support for fundamental Establishment Clause principles in court, in agency rules, regulations and guidance, and in rhetoric, too. What the President and top-ranking officials say about people who are non-religious or members of minority faiths matters. Promoting exclusionary and discriminatory messages and policies directly conflicts with the Constitution’s promise of religious equality and neutrality.

By prioritizing these actions, President Biden and his administration can begin to restore and advance true religious liberty for all.