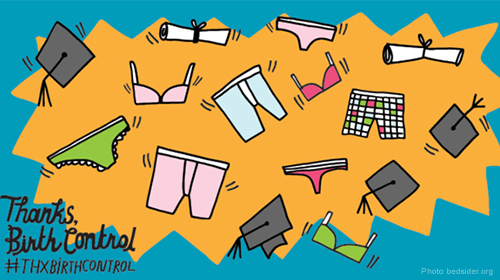 Just in time for Thanksgiving, it’s time to give thanks to our favorite wingwoman: Birth control.

I am just one of the many, many people who are thankful for birth control. Today on “Thanks Birth Control” Day, let me count the ways:

But most importantly, my birth control gives me the opportunity to control my body and my future. I’m young. I’m ambitious. I’m fun. But between working full-time, attending evening public health evening classes, running a high-school writing program, and making time for my friends and family, I can barely keep track of myself. I can’t fathom being responsible for the health, safety, and development of another person. Nuh-uh. I don’t think so. Without birth control, I wouldn’t be able to lead the life I love.

And I am not the only one– 99 percent of women use birth control at some point in their lives, giving women control of their bodies, and both men and women control of their futures. And the Centers for Disease Control and Prevention consider it one of the top public health achievements of the 20th century. Plus, we can now get it at no cost as part of the Affordable Care Act, which is totally awesome.

But across the country, companies are trying to refuse to comply with the law, claiming that providing birth control violates their religious liberties. The problem with that argument is that while they are entitled to their religious beliefs, they are not allowed to harm others in the process. And failing to provide women with birth control coverage has real harm to women.

So while I am thankful for birth control, I am also fighting for the women whose bosses are denying them the same access.

So today, tell @ACLU why you’re saying #thxbirthcontrol! And join our fight against politicians and businesses that are meddling in our personal, private decisions.