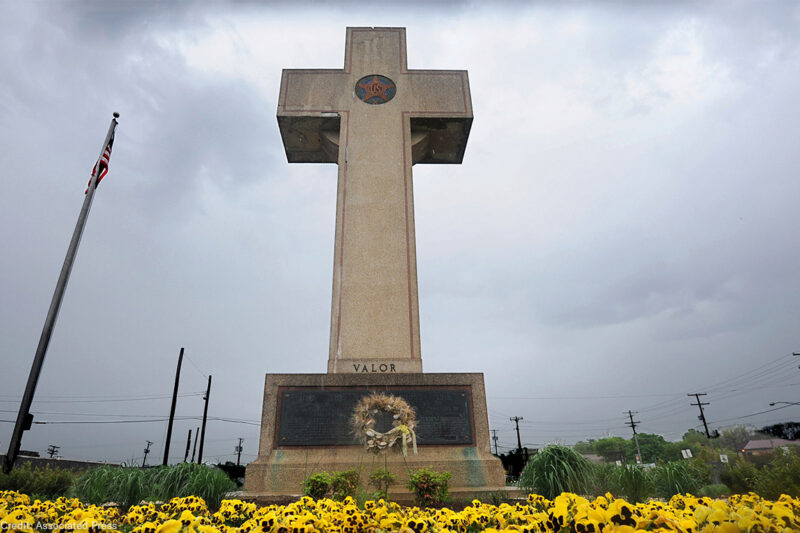 Today, the Supreme Court announced that a governmental display of a 40-foot-tall Latin cross as a war memorial for all veterans does not violate the Establishment Clause of the First Amendment. The decision ignores our constitutional commitment to official religious neutrality and is a slap in the face to non-Christian veterans. There is, however, a small silver lining: The opinion itself was narrow, making clear that the ruling is not an invitation for government officials to erect new religious displays.

In American Legion v. American Humanist Association, the court concluded that the Bladensburg Cross — originally built to honor a Maryland county’s World War I dead — is constitutional for a combination of reasons, including its nearly hundred-year history and the court’s belief that the cross has somehow taken on an “added secular meaning when used in World War I memorials.” But there are several flaws in the court’s reasoning.

First, in his opinion for the majority, Justice Alito cites the rows of white crosses that memorialize fallen American service members in World War I cemeteries overseas. Yet those crosses are tied to the individual faith of each soldier. Notably, the graves of Jewish service members in those cemeteries are marked with the Star of David, not a Latin cross. That’s because the Latin cross is inextricably linked to the Christian belief in the crucifixion of Jesus, the resurrection, and the promise of eternal life—a point emphasized in friend-of-the-court briefs filed by both the Baptist Joint Committee and the American Jewish War Veterans for the United States of America. As Justice Ginsburg explains in her dissent, the Latin cross is an “exclusively Christian symbol.” It is “not emblematic of any other faith,” and it certainly has “never shed its Christian character.”

Second, the Bladensburg Cross does not stand as a memorial to fallen World War I soldiers alone. Although the cross was erected in the 1920s on private land as a World War I memorial, the Maryland-National Capital Park and Planning Commission went out of its way in 1961 to acquire the cross and the land on which it sits — for the purpose of preserving the monument and, purportedly, to address traffic-safety concerns. But the Commission wasn’t satisfied with merely maintaining the cross’s connection to World War I; instead, it spent $100,000 renovating the monument, and then, in 1985, held a religious ceremony featuring prayer by a Catholic priest to rededicate the cross to veterans of all wars.

Finally, a constitutional violation shouldn’t be granted safe harbor merely because it has endured over time. The Bladensburg Cross was privately built and owned, and could have stood forever, undisturbed and without controversy. When individuals express religious beliefs or display religious symbols on private property — however prominently — it is perfectly constitutional. That changes, though, once the government decides to meddle with private religious expression by taking ownership over it. Here, the cross became a symbol of official religious preference for Christians when the Commission got involved. That the Bladensburg Cross has remained in place for so long, displayed and maintained by the government, only compounds and amplifies this message of religious exclusion.

Nevertheless, the court’s misguided focus on the monument’s age and the meaning of the cross as it relates to World War I necessarily limits the reach of today’s ruling. The decision merely permits the display of this specific monument given the unique circumstances surrounding it. It is not a license for government officials to put up religious symbols whenever and wherever they want. As the court’s majority emphasized, “retaining established, religiously expressive monuments, symbols, and practices is quite different from erecting or adopting new ones.”

Those who value the separation of church and state must remain vigilant. In rewriting the meaning of the Latin cross and treating it as a secular icon, even in these limited circumstances, the court has eroded fundamental constitutional principles. If the government can redefine the most recognizable and sacred of religious symbols and practices, and then co-opt them for official purposes, the Establishment Clause’s ban on government promotion of religion — and government preference for one faith — could soon become a relic of the past.