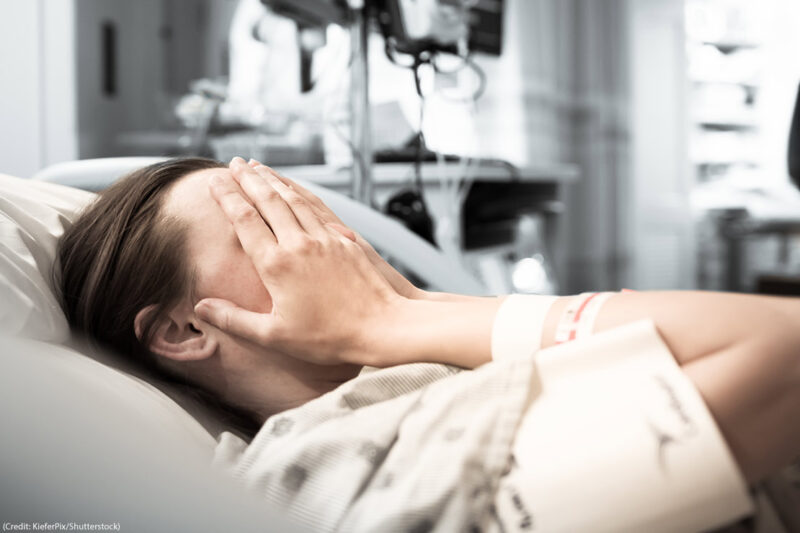 From the start, the Trump administration has issued one regulation after another that uses religion to deny people — particularly pregnant people, people with low-incomes, and LGBTQ people — health care access and coverage. Today, we are asking a federal district court in New York to strike down one of the most pernicious of these regulations: the refusal of care rule.

The refusal of care rule, issued by the Department of Health and Human Services (HHS), allows health care providers who receive federal funds to withhold critical information and to obstruct patient’s access to essential health care invoking their personal religious or moral beliefs — even in emergencies. The rule means that even if a hospital discovers an employee would be unwilling to care for all patients equally, they have to remain employed.

This could be deadly for patients. When asked, HHS refused to even answer whether the rule would allow a paramedic to refuse to drive a patient with a life-threatening ectopic pregnancy to the hospital because the paramedic knows the patient will receive an abortion. You read that right: The federal agency whose mission it is “to enhance and protect the health and well-being” of all of us would allow paramedics to abandon patients in an emergency because they personally are anti-abortion. Everyone is entitled to their religious beliefs, but those beliefs cannot be used to discriminate against others or to deny critical health care.

The refusal of care rule’s disregard for the harm to patients is alarming, but, unfortunately, not surprising. Early on, the Trump administration told the country that it would prioritize religious beliefs — and, let’s be clear, a very specific set of religious beliefs — above the needs of patients, regardless of the harms to individuals. And it has certainly lived up to that promise.

Indeed, the refusal of care rule is just one example of many. One of the first in this disturbing trend was the Trump administration’s move in October 2017 to roll back rules under the Affordable Care Act that ensure people have contraception coverage in their health plans without a co-pay. The Trump rule would allow almost any employer or university to block health insurance coverage for contraception for their employees or students because of their religious opposition to contraception. Fortunately, that rule has been blocked nationwide.

Then, in March 2019, the Trump administration set its sights on Title X, the nation’s only family planning program and the sole source of this kind of care for millions of low-income patients. HHS issued rules that allow health care providers to withhold information about abortion from patients — even when the patient specifically asks about it — based on the provider’s religious opposition. The administration is still trying to push trusted providers out of the Title X program and invite in religiously affiliated providers that will withhold critical information from patients. The Title X rule is already in effect, and participants across the country are being forced to withdraw from the program. Our case challenging the rules is ongoing.

Most recently, in May 2019, the Trump administration went after protections for transgender individuals and others who face sex discrimination in health care and insurance coverage. HHS has included a proposal to roll back those protections by carving out an absolute exemption for religiously-affiliated health care providers from the prohibition on sex discrimination. This would not just apply to a handful of providers: One in six patients is treated in a Catholic facility each year, and religious hospitals are also increasingly the only health care option in many regions. In 2016, 46 communities relied on a Catholic provider as their sole community hospital.

In each instance, the administration cites religious refusals as a reason to undermine the very programs they are tasked with advancing, including by pushing trusted health care providers out of those programs and by inviting providers into health care programs that withhold critical care and information from patients.

It’s clear that the Trump administration is doing everything it can to strip patients of protections that ensure that they get the proper health care, and is ignoring the devastating consequences of being denied care, including by our clients who were turned away from religiously affiliated hospitals when they needed treatment.

If this rule goes into effect next month as planned, the harms to patients and the health care providers that care for them will be real and exceedingly difficult to mitigate. That’s why we’re heading to court today to protect patients and make sure that the Trump administration does not do any more damage to health care access.