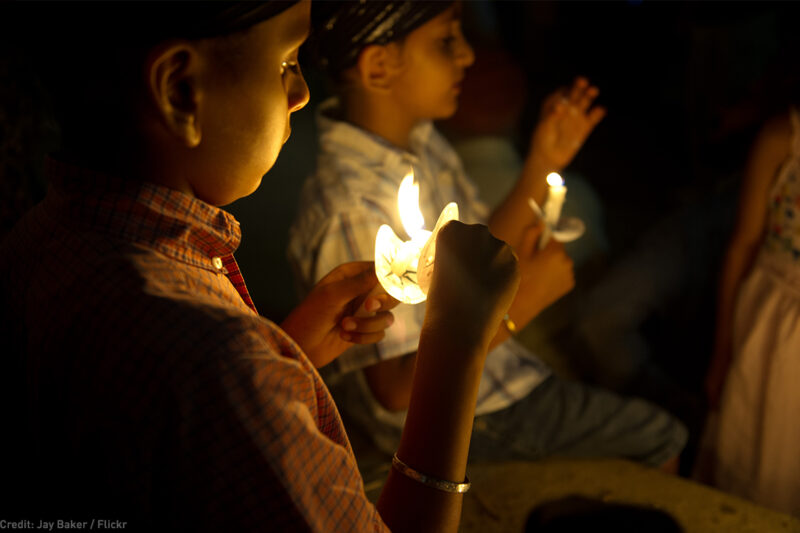 On the morning of August 5, 2012, Sikh community members in Oak Creek, Wisconsin, gathered at their local gurdwara for regular Sunday services. As worshippers arrived, a gunman — later discovered to have white supremacist ties — opened fire in the Sikh temple.

Paramjit Kaur, Suveg Singh Khattra, Satwant Singh Kaleka, Prakash Singh, Ranjit Singh, and Sita Singh were murdered that day. Three other people were seriously injured, one of whom, Baba Punjab Singh, remains in long-term care at an inpatient rehabilitation center due to the seriousness of his injuries.

The horror of the shooting shook Sikh communities around the country and faith-based communities and advocacy organizations planned vigils in solidarity, proclaiming “We are all Sikhs.” The refrain recognized that when one faith community is targeted for violence or harassment, it is an attack on religious freedom for all.

Tomorrow marks the fifth anniversary of the Oak Creek tragedy. As we join Sikh communities and allies in remembering the victims, we also recognize that much work remains to ensure that Sikh communities, and all faith communities, enjoy full religious liberty, free from fear of violence and harm.

Unfortunately, the Oak Creek shooting was not the first or last attack on Sikhs or others targeted because of their faith. In May, for example, two men were sentenced for stabbing and beating Maan Singh Khalsa in California. They ripped off his turban and cut his hair while yelling profanities. In March, Deep Rai was shot in the arm near Seattle after his attacker told him to “go back to [his] own country.”

These incidents are not anomalies.

South Asian, Arab, Middle Eastern, and Muslim communities have long experienced harassment, discrimination, and attacks based on what they wear, what they look like, or where they come from. Most recently, these attacks have escalated, with incidents targeting Muslims seeming to surpass the number of incidents in the aftermath of 9/11. The new administration contributes to this climate of xenophobia, introducing policies that paint these communities as threats to society and emboldening such attacks by creating an environment in which they are neither condemned nor acknowledged.

The rise in attacks in this current toxic environment paints a bleak picture of violence and harassment that jeopardizes the safety of our local communities. But the resilience of Sikh communities, especially in Oak Creek, is inspirational to say the least.
Every year, the community organizes a memorial 6K along with other events to honor the six individuals who were killed and celebrate the coming together across communities in Oak Creek. National organizations, such as the Sikh Coalition and South Asian Americans Leading Together, travel to Oak Creek to participate in community events and will this year engage in a Twitter town hall along with other advocacy organizations and provide coverage of events via Facebook Live. Simultaneously, new campaigns such as the National Sikh Campaign’s We Are Sikhs, have also launched to educate communities about the Sikh faith and work to safeguard religious freedom for Sikhs.

Protecting religious liberty for people of all faiths has always been at the core of the ACLU’s mission, both through legal action and public education efforts. We’ve worked in recent years to defend and advance Sikhs’ religious freedom in a variety of contexts, alongside organizations like UNITED SIKHS, the Sikh Coalition, and the Sikh American Legal Defense and Education Fund. Through these partnerships, we have, for example, won a landmark court victory for Sikhs who want to serve in the military; assisted Gurdit Singh, a mail carrier, at Disney World in receiving a religious accommodation; and supported Jagjeet Singh when he was barred from wearing his turban in a courtroom in Mississippi.

Motivated by the memory of those who died and were injured in Oak Creek five years ago, we will continue to work, both in and out of court, with Sikh communities to protect the religious freedom of Sikhs and all people. Too many lives have been destroyed by attacks like the one in Oak Creek. Too many people have suffered harassment and discrimination because of bigotry. Too many people live in fear when they should be able to freely practice their faith as our Constitution guarantees.

On August 5, and always, we stand in solidarity with Oak Creek, Sikh communities around the country, and every individual and faith community that has been targeted by hate—just as the community in Oak Creek has done for others.