We Need Accountability for Those Who Commit Violence Against Native Women 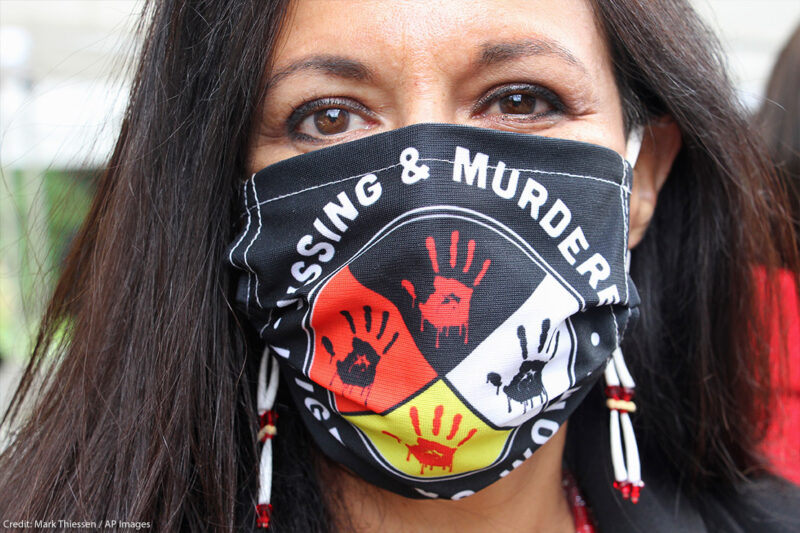 Law enforcement must be held accountable when officers abuse their authority to sexually assault the very people they are sworn to protect.

CONTENT WARNING: The following content contains details of sexual violence and may be harmful or traumatizing to some readers.

When L.B., a Northern Cheyenne woman, called the Bureau of Indian Affairs (BIA) to her house for help, she was hoping to receive support. Instead, she was sexually assaulted by a law enforcement officer who was sworn to protect her.

In October 2015, L.B. called the police to report that her mother was driving while intoxicated. Shortly after, a BIA officer arrived at L.B.’s house dressed in uniform in what started out as a routine visit. The officer entered her home and asked L.B. if she was alone. L.B. explained that her children were sleeping in another room and admitted to having a couple of drinks that evening. The officer proceeded to administer a breathalyzer test. When she did not pass the test, he accused her of child endangerment, threatened to arrest her, and then threatened to contact social services and have them take her children away from her.

The threats left L.B. visibly distraught and fearful of losing her children and her job. The officer then used his threats and power as a law enforcement officer to prey on her and force her to have sex with him. What started out as a call for help quickly turned into a threatening situation that ended in sexual assault.

One of these legal loopholes stems from a 1978 U.S. Supreme Court decision that eliminated tribal criminal jurisdiction over non-Indian perpetrated crimes on tribal lands. This prevents tribes from being able to prosecute the majority of violent crimes committed against their citizens in their own homes, including crimes of sexual violence. The Supreme Court’s decision in Oliphant, in most cases, leaves the federal government as the only government with jurisdiction to prosecute a sexual assault committed against a Native woman on tribal lands. But when federal law enforcement officers are the perpetrators themselves, it’s even more unlikely these women will receive justice. This is why we filed an amicus brief in support of L.B. and calling for law enforcement to be held accountable for committing and perpetuating sexual violence against Indigenous women.

Federal law enforcement has historically failed to protect against, and has often perpetuated, racialized and gender-based violence against Indigenous women and girls. Law enforcement is typically unresponsive to tribal needs, open cases languish unresolved, and wrongdoers exploit these gaps to prey on Native women and girls. This is critical for tribal citizens where sexual assault, human trafficking, and other forms of violence have reached crisis levels, especially for women and girls.

Native communities have frequently expressed frustration about the difficulty of being heard by federal authorities. Fear and mistrust of the government is the result of generations of broken promises and is an ongoing barrier to reporting. Because reservations can be policed by as few as half a dozen BIA officers, survivors of sexual misconduct by these officers rightly are concerned that they will have to interact with their abusers again in the future, discouraging them from coming forward. And when survivors do come forward, they face legal barriers to receiving justice.

In the L.B. case, the Montana Supreme Court will decide whether state law holds federal agencies accountable when one of its law enforcement officers uses their power and authority over a citizen to commit sexual assault. The officer who raped L.B. was convicted of rape and sentenced in May 2018 to three years in federal prison. In L.B.’s ensuing civil lawsuit for damages, however, a federal judge found the government was not liable for the BIA officer’s actions because the officer was “not acting in the scope of his employment” at the time of the rape. L.B. appealed to the Ninth Circuit Court of Appeals, which in August sought guidance from the Montana Supreme Court.

In the 1990s in Maguire v. State, the Montana Supreme Court suggested that sexual assault falls outside the scope of ordinary employment, which arguably includes law enforcement. The consequence of the Montana Supreme Court’s decision in Maguire is that women and children who are sexually assaulted by federal law officers within the state of Montana cannot sue the federal government, nor can they hold a federal law enforcement agency responsible for the actions of its officers.