The Links Between Racialized and Gender-Based Violence 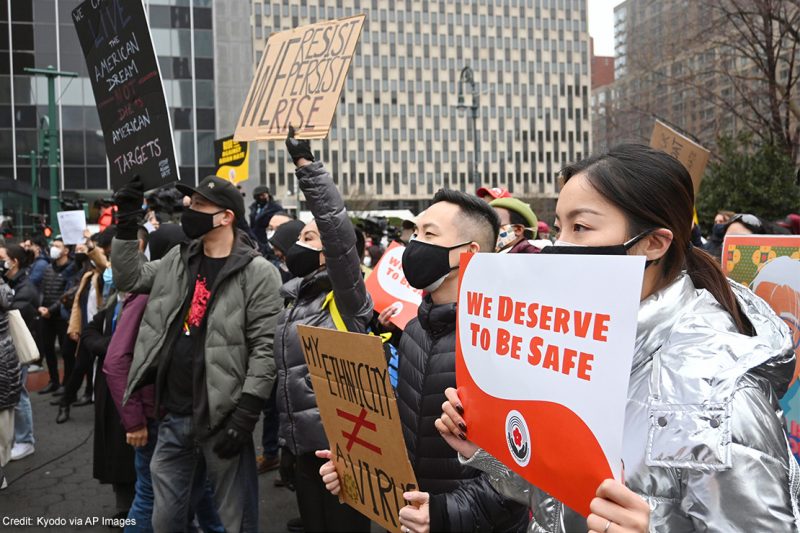 Racialized and gender-based violence are deeply intertwined and rooted in prejudice and discrimination. Recognizing this is just the starting point to address and prevent violence experienced by those who are most marginalized in our society.

Like so many Asian Americans, I was shattered by the shooting rampage that killed six Asian women and two other people on March 17. Grief turned to rage when Cherokee County Sheriff’s Office Captain Jay Baker announced, “The suspect did take responsibility for the shootings … but he does claim that it was not racially motivated.”

That statement rested on a false and dangerous assumption — that targeting women viewed as sexual “temptations” could not be racist. But women of color so often live at the intersection of harm caused by racism, sexism, and other forms of discrimination. The Atlanta shootings and the recent rise in anti-Asian hate incidents, almost 70 percent of which were committed against Asian women, are only the latest examples. Recognizing that racialized and gender-based violence are deeply intertwined, rooted in prejudice and discrimination, is just a starting point. But without this understanding, there is little hope that we can actually address and prevent violence experienced by those who are most marginalized in our society.

Women of color have long known this, leading calls for responses to violence that serve the needs of their communities. Years before her arrest for refusing to give up her seat on a bus, Rosa Parks organized on behalf of Recy Taylor, a young Black woman who was raped by six white men in Alabama in 1944. Parks and others launched a national and global campaign seeking justice for Taylor, after local law enforcement covered up the crime. That work identified the crisis that continues to this day — people and institutions ignore the violence and abuse committed against Black women and other women of color. Even worse, they often perpetuate it.

The Missing and Murdered Indigenous Women, Girls and Two Spirit movement, led by Indigenous women, condemns the failure of law enforcement agencies to stop the appalling disappearances, abuse, and murders of Indigenous women. The U.S. legal system, with some exceptions, prohibits tribal jurisdiction over perpetrators of crime who are not citizens of tribal nations. This allows many to commit violence against Native American women with impunity. Indigenous leaders’ demands for combatting violence against Native American women focus on the history of colonization and racism that fuels its modern forms.

For years, domestic workers have pursued accountability for labor trafficking, which disproportionately entraps women of color and immigrant workers in slavery-like conditions. Yet they frequently have little recourse under federal law, which exempts domestic workers from many of its protections. Domestic workers are advocating in the U.S. and internationally for recognition of their fundamental rights, including the right to live free from violence and exploitation.

Young women and gender nonconforming people of color likewise are organizing to protest the multiple forms of violence and abuse committed against them daily. One example is the National Agenda for Black Girls, an initiative of Girls for Gender Equity endorsed by scores of other anti-violence groups, that elevates the top priorities identified by Black girls, including comprehensive measures aimed at the systematic abuse of Black girls based on racist and sexist stereotypes.

Racialized and gender-based violence has no place in our society, law, or institutions, and we need structural solutions to address this.

President Biden announced one such effort, with the reinstatement of the White House Initiative on Asian Americans and Pacific Islanders, charged with focusing on gender-based violence.

Moreover, a significant measure that acknowledges the violence that women of color face is currently before Congress. On March 18, the day after the Atlanta killings, the U.S. House of Representatives passed the Violence Against Women Reauthorization Act of 2021. The legislation authorizes new funding for culturally specific services for survivors of domestic violence and gender-based violence. It also highlights the disproportionate violence experienced by American Indian and Alaska Native women by extending tribal jurisdiction over non-Native American perpetrators of dating violence and sexual violence and requiring reporting of data on missing and murdered Native American women and law enforcement investigations.

The bill also recognizes that people who experience violence need relief outside the criminal legal system, which often has failed survivors and their families, especially women of color and LGBTQ people. They require access to secure housing, community-based violence prevention strategies, and protection from discrimination when seeking services. The bill responds to these priorities by substantially expanding housing protections, funding restorative practices, and holding governments and other organizations accountable when they discriminate against survivors, including based on race, national origin, and sexual orientation or gender identity.

The federal government has a crucial role to play in addressing the horrifying impact of gender-based violence on survivors and their families. Now, the Senate should do its part and pass the legislation, a step forward toward naming and ending the violence and abuse borne by women of color.