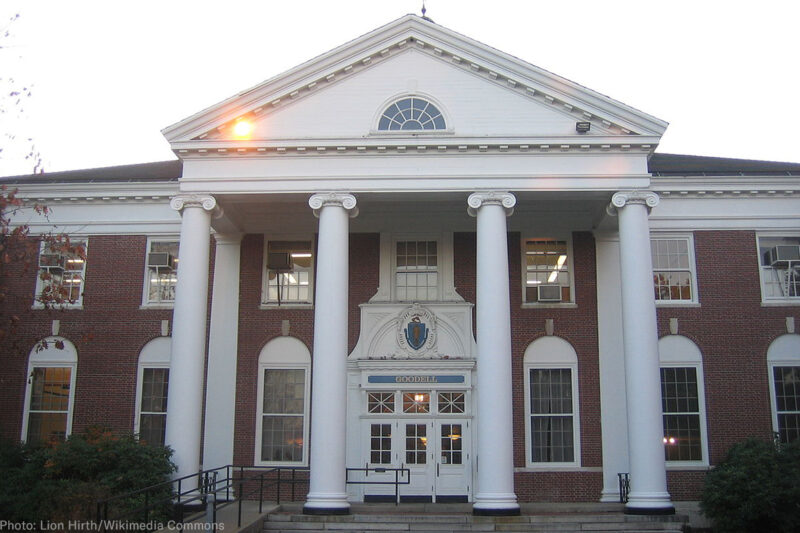 Last month, I walked across the campus of the University of Massachusetts Amherst to get to work. It was an ordinary stroll. But to a bystander, the sight of an educated Black professional going about his day was apparently cause for alarm.

That bystander called the police. My workplace was shut down. I was, and remain, humiliated.

Racial profiling at predominantly white institutions is nothing new, and this wasn’t the first time that I had to grit my teeth through a degrading interaction with police at the university. But this time, it made the news.

The day had started off normally, with my morning exercise routine at the campus recreation center before work. I was still in a positive mood during my daily stroll from the campus recreation center to my office at the Whitmore Administration Building, where I work as a case manager for the university’s disability services office. Over the years, I’ve helped hundreds of UMass Amherst students with physical and intellectual disabilities get the resources they deserve. It’s a role I take pride in, and I give it my all every day.

But on September 14, campus police were waiting for me when I arrived at the reception desk at Whitmore. I had no idea why, but I knew it couldn’t be good. My heart started pounding.

Two university detectives sat me down me in an office and closed the door. Bewildered, I asked what was happening. They refused to answer as they peppered me with questions.

“What time did you wake up?” “What were you doing at the campus recreation center?” “Did you come into the building agitated?” I felt confused, powerless, and scared, but I made sure to maintain my composure. I remembered that even unarmed Black people disproportionately get killed during police encounters, and it was incumbent on me as an innocent Black man to show that I wasn’t a threat.

It wasn’t until the end of their interrogation that they revealed why I was being questioned. Someone had called the university’s anonymous tip line, reporting that they had seen an “agitated Black male” who was carrying “a heavy backpack that is almost hitting the ground” as he approached the Whitmore Administration Building. I — the “agitated Black male” — apparently posed such a threat that police put the entire building on lockdown for half an hour.

I have no idea how the caller come to the conclusion that I was “agitated,” considering they hadn’t interacted with me. I do know that Black people are often stereotyped as angry, armed, or dangerous.

I’ve had to answer to the police before for being a Black man at UMass Amherst.

I remember the time that someone reported me to the police for listening to an audiobook in an empty classroom when I was an undergraduate at the university.

And the time, just four years ago, when someone decided that the sight of me entering my own office to drop off work supplies on a Saturday was reason to call the cops.

The surveillance and policing of my behavior have taken a toll on my mental health. I feel paranoid and unsafe on a campus that claims to be inclusive. It feels like any move I make, no matter how ordinary, can trigger a stressful encounter with the cops.

It’s not just here in Amherst. It’s also down the road, where a Black Smith College student was reported to police for eating in a common room. And in New Haven, where a Black graduate student had the police called on her for taking a nap in her dorm building. Also at Colorado State University, where two Native American teenagers were reported to 911 for joining a campus tour.

And just think of all the stories that haven’t gone viral.

People who carry out their racial biases by calling the police have the luxury of staying anonymous. The targets of their calls don’t have that privilege. Before picking up the phone, people should ask themselves: Would I be making this call if the person were white? If no one is in danger, am I okay with the fact that this police call could follow the person for the rest of their life?

Universities must also do their part, especially at schools like UMass Amherst that manage their own police forces. Better training and policies can ensure that they’re not doing the racist bidding of vindictive 911 callers. Sweeping “see something, say something” directives must be amended to address the fact that dark skin is often the “something” prompts suspicion. I hope UMass Amherst will do the right thing — including cooperating with the public records request that the ACLU helped me file this week. It’s important for us to know what the anonymous caller said as well as the campus police department’s protocols for responding to 911 calls and anonymous tips that may be based on racial bias.

Following the incident, a white colleague suggested I should try smiling more. Putting on a happy face, he implied, could have prevented this from happening. But racial profiling is not the fault of its victims. Performing happiness won’t change the reality that my skin color will continue to make some people assume I’m an “agitated Black male.”

Every day across the nation, the ACLU is called on to defend all the freedoms guaranteed in the Constitution and the Bill of Rights. There’s never been a more important time to support the ACLU and our effective work to protect civil liberties. If you like what you just read, help us continue to speak freely by donating today.