How Being Separated From My Family and Tribe Affected Me 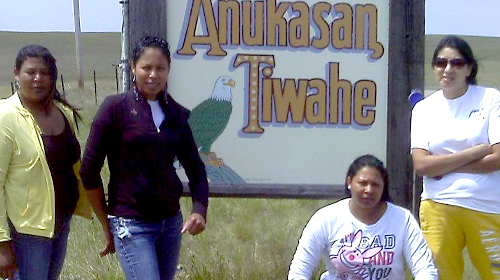 Today the Supreme Court will hear Adoptive Couple v. Baby Girl, a case about a South Carolina Indian girl who the South Carolina Supreme Court ruled that the child must be returned to her Indian father. The child’s mother ignored the Indian Child Welfare Act (ICWA) of 1978, a federal law designed to protect Indian families from “abusive child welfare practices that resulted in the separation of large numbers of Indian children from their families and tribes through adoption or foster case placement” and, as a result, both the tribe and the father were denied their rights under ICWA.

As the Supreme Court hears this case, the coverage has been largely one-sided. I thought it was important for people to hear my story, and how being separated from my family and tribe has affected me.

My name is Jacqueline Davis. I am one of six siblings affected by a decision made by the state of South Carolina. I am a member of the Cheyenne River Sioux Tribe in South Dakota and my grandfather is Chief Dave Bald Eagle. My father, who is African-American, met my mom and married her while he was stationed in the Air Force. They eventually moved off the reservation to South Carolina. Their lives changed one day when my mother applied for WIC and the nurse realized that she spanked her children as a form of discipline. Their children were taken and placed in foster care. We were split in pairs. The charges were piled on, and our parents lost custody. The Bald Eagle family offered to take us on the reservation and for reasons I still don’t know they were told our case had nothing to do with ICWA. I can remember my parents coming to visit us for years.

My mother would show us beadwork, and bring us hairpieces and other handmade gifts from our reservation. She would tell us what each color meant in the beadwork she had made. Then we would go back to our foster home, where we were being abused emotionally and physically. I was a teen when DSS cut off visitation. I can remember trying to make myself look more “black” because I felt like it something wrong with being Native American. I would cut my hair, put product in it to make it look coarse and threw away my hairpieces. I would just try anything to make myself fit because as I child I didn’t understand what was so wrong with me. Our family was completely torn apart because no one would swallow their pride and admit they had made a mistake. As adults, the six of us have a void in our lives that no one can go back and fill. We have reconnected with each since 1999 and we still do not have answers as to why this happened to our family.

We are still grasping everything we can learn about our Sioux culture by beginning to take yearly trips to South Dakota. Our grandpa, Chief Bald Eagle, is 93 years old. We are to finally go back this year to complete our naming ceremonies which were never completed as children. My grandfather gave me the Lakota name Ho Waste Win which means “good voice woman.” By finally reconnecting with my Native family, I can say my life has turned around for the better. These days we take pride in who we are and continue to learn our native traditions, cultures, and beliefs. I used to be very introverted and even a little antisocial but now I feel like I have reason to speak, fight, and help others that may need to be spoken for. One day I hope to get some form of justice for my parents, even if it is as little as a public apology. I will continue to speak of our story because our testimony may help the next social worker, lawyer, or judge to just simply do the right thing.