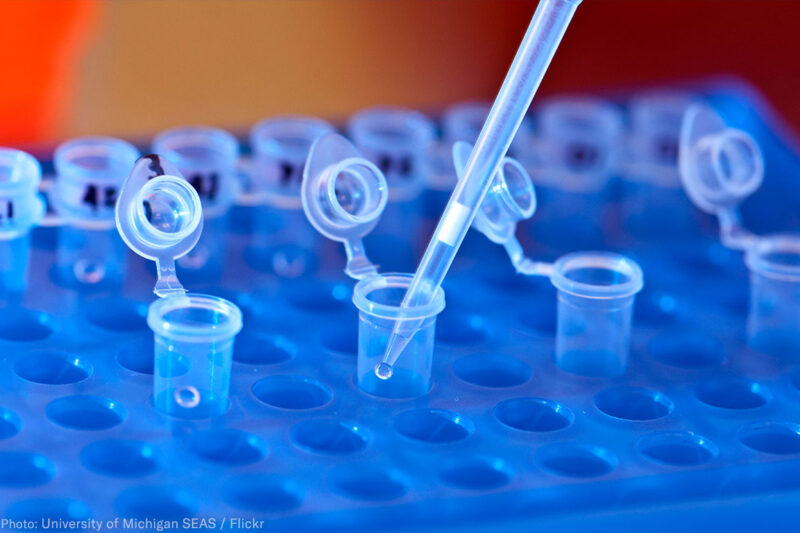 In early December, the Virginia State Crime Commission endorsed legislation that would expand the list of misdemeanors for which DNA collection would be mandatory for people convicted of those minor crimes. While the commission believes the move is necessary for public safety, it actually is a creeping assault on Virginians’ privacy and due process rights that could lead to more bias in the state’s criminal justice system — and even false convictions.

Proponents of mandatory DNA collection argue that more cold cases will be solved and future heinous crimes prevented if evidence collected at crime scenes can be matched against the state’s database to identify perpetrators. However, the practice of government DNA collection, storage, and analysis raises clear and obvious privacy and due process concerns that only become exacerbated as the government broadens the net it casts to gather samples.

The privacy issues related to the practice of DNA collection in general cannot be overstated. A person’s DNA inherently contains the most sensitive, personal information about them, including ancestry, complete health information, and predictive data about their predisposition to certain illnesses or behaviors that the individual may not even know about.

Regarding whose DNA gets collected, Virginia law already goes beyond what is reasonable or justifiable. Currently, the state collects DNA not only from people convicted of felony offenses but also those found guilty of one of 14 misdemeanors ranging from indecent exposure to unauthorized use of a motor vehicle. And in the case of violent felonies and some types of burglaries, only an arrest — not a conviction — is needed to trigger forced DNA collection, calling into question the state’s fundamental commitment to the doctrine of presumed innocence.

The current list already includes the most subjective offense on the books in Virginia: resisting arrest. This exacerbates the likelihood of disparate enforcement of the law, further skewing the composition of the database. In addition, Virginia is one of nine states that permit familial DNA database searches — scanning not just for a particular suspect but other people who are related to them — which vastly increases the number of people whose privacy is compromised and who are subject to potential false arrest.

Now the commission has recommended that the state legislature add at least another half-dozen misdemeanors to the list, including assault and battery, domestic assault, petty larceny, trespassing and destruction of property, obstruction of justice, and shoplifting. Those are things we can agree that people certainly shouldn’t do, but they are hardly the aggravated type of crimes Virginia’s database — the nation’s oldest and largest — was supposedly designed to ward against.

Even the crime commission’s own staff criminologist, in presenting a report to the commission last month, refused to use the word “correlation” to describe the “predictive” connection between the listed misdemeanors and later serious offenses. She only talked about an “association” and acknowledged that few people found guilty of lesser offenses go on to commit serious violent felonies.

In fact, while the state’s databank now includes a DNA sample from about one in every 20 Virginians — 426,534 to be precise — the number of case “hits” is actually in decline, down from 933 in 2010 to 531 in 2017, according to the Virginia Department of Forensic Science’s own statistics. Nearly two-thirds of the crimes being solved or assisted in being solved through such matches are for nonviolent burglaries or robberies rather than violent crimes such as murder and rape.

So if the number of crimes being solved is down, and most of the ones being cleared aren’t even the violent acts the database supposedly was intended to prevent, why is it so important to collect more people’s DNA?

Supporters say DNA collection protects public safety, but the reality is increasing the size of DNA databases actually raises the likelihood of false hits. Recent studies have confirmed that erroneous matches between DNA profiles from different people, including close relatives, are far from impossible and can lead to false arrests and convictions.

Lastly, expanding mandatory collection increases the possibility of ethnic bias. Since certain groups such as African-Americans are over-represented in the criminal justice system in general, they would also be over-represented in the database. That could lead to a disproportionate number of arrests of innocent people from within those same ethnic groups.

Around the country, we have seen a steady expansion of DNA collection, starting from people convicted of a tiny set of very serious crimes, such as rape and murder, and then broadening to all felony convictions. Increasingly, states now collect DNA from people convicted of misdemeanors as well as from those who have been merely arrested for certain crimes but not convicted. Unfortunately, that slippery slope is very much evident in Virginia.

The ACLU of Virginia has been vocal in its opposition to expansion of the commonwealth’s database, and we’ll resist any attempt to codify the crime commission’s advice during this year’s General Assembly session, which starts Jan. 10. Stay tuned.