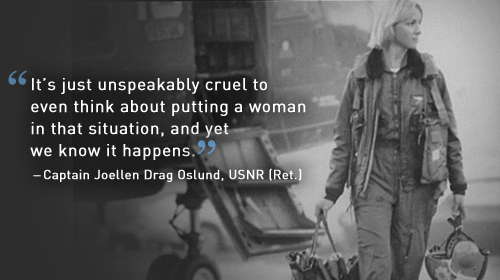 We are defending a Constitution that doesn’t apply to us.

Those are the words that a young servicewoman, Jessica Kenyon, shared with us last year. Jessica joined the U.S. Army in 2005, and while she was stationed in Korea she was raped by a fellow soldier, and became pregnant as a result of the assault. Sadly, a federal law, which prevents servicewomen who have been raped and become pregnant from using their health insurance to cover abortion, made Jessica’s ordeal much worse. Deeply traumatized by the sexual assault and her treatment by the military, Jessica left the Army, ending a promising military career.

Speak out on behalf of our servicewomen, like Jessica. Use our tweet generator to automatically create a tweet targeting some of the key decision makers on the Hill who could help restore fair and reasonable heath coverage to women serving in the military. By using hashtags like #ShaheenAmdt, #NDAA, and #equality4servicewomen, we hope to elevate and amplify the conversation around the military abortion ban and demand fairness for servicewomen.

There are more than 400,000 women who proudly serve in our armed forces. They put their lives on the line every day to defend our freedoms but are denied coverage for the same health care available to the civilians they fight to protect. If a servicewoman is raped, becomes pregnant and decides to have an abortion, her insurance won’t cover it despite the fact that other federal employees do have insurance coverage for abortion in cases of rape and incest.

This law is unjust and unfair, but you can help make things right for our courageous servicewomen.

Join us in asking Congress to include a provision — put forward by Senator Jeanne Shaheen and adopted by the Senate Armed Services Committee in May — in the final National Defense Authorization Act (NDAA). It would change this outrageous policy, and allow military women and dependents to receive insurance coverage of abortion in cases of rape or incest.

This is about taking care of our troops. The Senate began debating its version of the NDAA this week. The Shaheen Amendment is already in their version of the bill and we have to make sure they don’t take it out or change it, so please tweet now and tweet often.