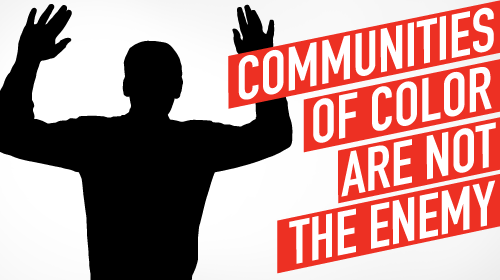 This post originally appeared on the ACLU of Missouri’s blog.

The United States Department of Justice will confirm tomorrow what residents in the St. Louis metro area have long known: If you’re black in Ferguson, you have a greater chance of being stopped, searched, arrested, cited, and abused by police.

The department found that “Ferguson Police disproportionately stopped African-Americans for no reasonable suspicion, made arrests with no probable cause and used force disproportionately against blacks,” according to the St. Louis Post Dispatch. Of the 14 incidents where a police dog bit a person and there was racial information, 100 percent of the bitten were black. The Justice Department also reportedly uncovered evidence of racist emails within the police department.

These findings are intolerable. And they are not unique to Ferguson. In cities and towns across the United States, communities of color are under siege by their own police departments, as documented by ACLU affiliates in Connecticut, Illinois, Massachusetts, Minnesota, New Jersey, New York, Pennsylvania, and elsewhere.

We must find a way forward. Here in the St. Louis area, all of us as a community must first look back at the shooting of Michael Brown and the protests that followed. Darren Wilson, a white police officer who stated Mr. Brown looked like a “demon,” shot the unarmed teenager down in the street. And that officer was employed by a department that treated blacks unfairly and circulated racist “jokes.”

Only by looking back honestly at where we’ve been can we find our way towards fair policing.

Many individuals, organizations, elected officials, community leaders, and commissions are working to find solutions, both here in St. Louis and nationally. On Monday, the President’s Task Force on 21st Century Policing issued an ambitious set of recommendations. A common theme in both local and federal reform efforts is policing that returns to a model of “protect and serve.” Service encompasses the idea that those being served must be included in creating a solution based on mutual trust and respect.

The ACLU of Ohio worked in Cincinnati with the African-American community, police leaders, elected officials, civil rights and police misconduct lawyers, and police unions to collaboratively negotiate a model of community policing that respected community and individual rights while also giving police the tools to keep those communities safe.

We can do the same here in St. Louis and cities and towns across America.

If we fail to do so, our past of racial segregation and discrimination will continue to haunt us. The only difference now is that the “Whites Only” signs have been replaced by a “new Jim Crow” that demeans African-Americans through arrests, fines, and imprisonment.