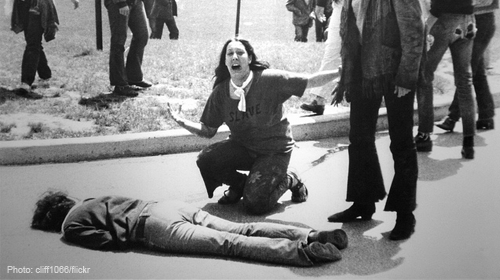 On May 4, 1970, members of the Ohio National Guard fired between 61 and 67 shots into a crowd of unarmed anti-war protestors at Kent State University in Ohio, killing four students and wounding nine others. My 19-year-old sister, Allison Krause, was one of four students shot to death by the Ohio National Guard in the parking lot of her university campus as she protested the Vietnam War. I was 15 years old at the time.

It has been 44 years, and the U.S. government still refuses to admit that it participated in the killing of four young students at Kent State. There has not been a credible, independent, impartial investigation into Kent State. No group or individual has been held accountable. In 2010, after undeniable forensic evidence emerged pointing to direct U.S. government involvement in the killings, Emily Kunstler and I founded the Kent State Truth Tribunal (KSTT). Our hope was to finally receive a full account of the tragic events and to see that the victims and their families receive redress. In 2012, the U.S. Department of Justice refused to reopen the case, claiming there were “insurmountable legal and evidentiary barriers.”

But justice for Allison doesn’t have to end there. To that end, we are traveling to Geneva, Switzerland, next week to demand accountability for the Kent State massacre before the United Nations Human Rights Committee, which will be reviewing U.S. compliance with the International Covenant on Civil and Political Rights (ICCPR), one of the few human rights treaties ratified by the United States.

The right to assemble and protest is a cherished American value and is a universal human right. But the United States – and so many other proclaimed democracies around the world – repeatedly and shamelessly commits gross violations of this human right. We were recently reminded of extensive U.S. government surveillance of anti-war activists in the 1960s, but sadly, such dangerous activity isn’t a thing of the distant past. As recently as 2011, with the start of the “Occupy” movement, protestors were labeled “domestic terrorists,” surveilled by the FBI, and arrested in massive numbers for nonviolent demonstrations and assemblies.

The Kent State precedent has cast a shadow over our democracy for over 40 years. If Kent State remains a glaring example of government impunity, it sends a message that protestors can be killed by the state for expressing their political beliefs. This lack of accountability and hostility towards peaceful expression flies in the face not only of our Constitution, but also our international human rights commitments.

Though we are a small organization, KSTT is committed to seeking justice for the victims of the Kent State massacre. Next week, representatives from KSTT will be briefing the U.N. Human Rights Committee about the United States’ failure to provide full accountability for the Kent State massacre. We hope the Committee will ask our government to provide answers regarding its complicity in the killing of peaceful protesters, or at the very least acknowledge its failure to conduct a thorough and credible investigation. We intend to make it clear that we have not forgotten the horrific event that took place at Kent State. Allison stood for peace and died for peace. May no other protestor in the U.S. ever have to pay the price she paid for her peaceful political expression and dissent.

Laurel Krause is a writer dedicated to raising awareness about ocean protection, safe renewable energy and truth at Kent State. She is the cofounder and director of the Kent State Truth Tribunal.

Click here for more on the ACLU’s work on behalf of the students who were killed or injured at Kent State University.