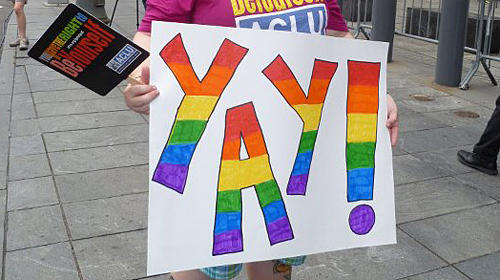 Valentine’s Day came a day early in Washington state. Yesterday, Gov. Chris Gregoire signed a bill making Washington the seventh state to extend civil marriage to same-sex couples. Our state’s leaders have recognized that the relationships of all loving, committed couples need to be treated with the same respect under state law.

The moment is made even sweeter as I recall the many years and scores of people that it took to get us here.

The path was long and steep, but the Wash. state legislature pushed forward on a journey toward full acceptance of lesbian and gay relationships. In 2007 it passed a domestic partnership law which provided hospital visitation rights, the ability to authorize autopsies and organ donations, and inheritance rights when there is no will. In 2009, legislators passed and voters statewide later upheld a bill that expanded those rights to include all the rights and responsibilities that opposite-sex couples have — the “everything-but-marriage” bill, as it was called. Senior couples 62 and older could register as domestic partnerships as well. Nearly 19,000 people in Washington registered as domestic partners.

When the final push for marriage equality began in this year’s legislature, eyes were on the Senate, which appeared to be five votes short of a favorable majority. Gov. Gregoire gave the cause a significant boost in early January with a heart-felt public endorsement. A Catholic, she acknowledged that coming to support legal marriage for all couples has been a “personal journey” for her. “How can we tell some children that their parents’ love is less equal than that of others?” she asked.

One-by-one, lawmakers on both sides of the aisle similarly changed their minds and stretched themselves to do what is right, not what is easy. Ultimately, the marriage equality bill passed by comfortable margins, first with a 28-21 vote in the Senate and then 55-43 in the House. A video of Republican Representative Maureen Walsh’s emotional speech — about her lesbian daughter and her own decision to support the bill — has gone viral.

The story of marriage equality in our state is not over yet, though. Anti-equality forces are expected to file a referendum measure seeking to overturn the new law. That would put the new law on hold until after the result of this fall’s elections. And, confusing matters, a right-wing attorney already has filed an initiative measure aimed to prevent the enactment of any civil marriage law for same-sex couples.

History teaches us that the struggle for social justice is a long-term effort. With our coalition partners in Washington United for Marriage, we already are making preparations to defend the legislative victory at the ballot box. We take comfort in the knowledge that the arc of history bends toward justice.