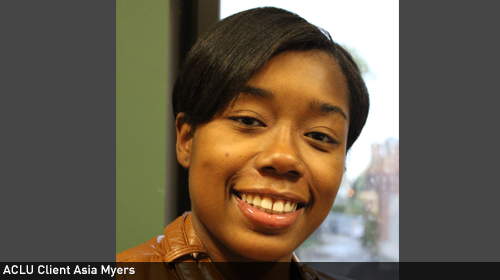 Asia Myers, a pregnant woman expecting a baby girl in less than a month, works for an employer that forced her to make an unthinkable choice between a healthy pregnancy and her paycheck.

Early in her pregnancy, Asia suffered from complications serious enough for her doctor to put her on bed rest. After she improved, her doctor cleared her to return to work as a nursing assistant at a long-term care facility, as long as she did not do any lifting. Despite the fact that Asia’s employer routinely grants this kind of accommodation to workers with similar lifting restrictions, her employer refused to give her an accommodation to avoid jeopardizing the health of her pregnancy. Instead, her employer told her that she could either take unpaid leave or continue working without considerations for the health of her pregnancy.

When she was denied the accommodation she requested based on her doctor’s restrictions, Asia had to go on unpaid leave.

“I was without work for more than 30 days, unable to make ends meet. I felt like I had to choose between my health and my finances,” Asia told us. “I was outraged that my employer seemed to care nothing about my safety or the safety of my child. It’s not right!”

After being out of work for weeks and watching bills pile up, her doctor lifted the restrictions and Asia was able to go back to work. But she worried every day that if she needs light duty again, she would be forced to choose between putting her pregnancy at serious risk and putting food on the table.

Many women are able to work throughout their pregnancies without any changes in their job. But women in jobs that require strenuous physical activity may need a minor modification in order to continue working without endangering their pregnancies. Too many employers are refusing to provide reasonable accommodations—although they provide accommodations for workers who aren’t pregnant—and instead are pushing pregnant women out of their jobs by firing them or forcing them to take unpaid leave.

The ACLU has filed a in federal court on behalf of Asia, because it’s time for employers to realize they can’t discriminate against pregnant and parenting workers by forcing them off the job.