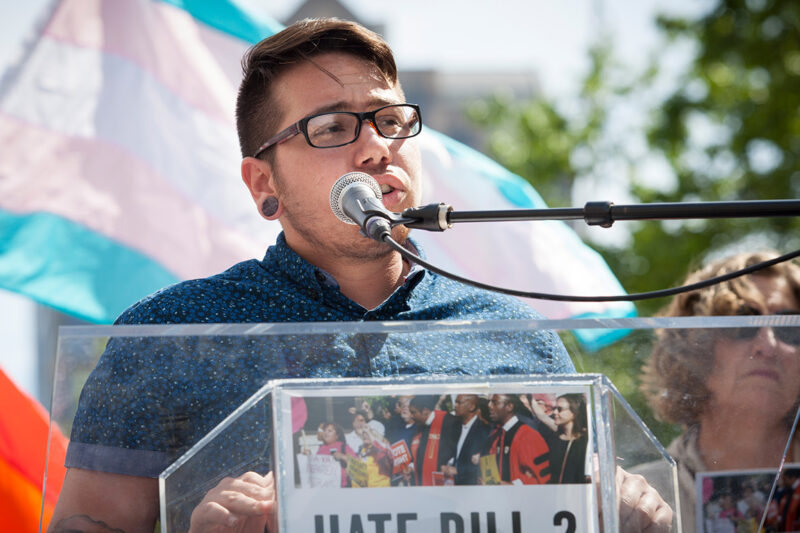 It’s been more than three years since North Carolina lawmakers passed House Bill 2, the hateful North Carolina law that compromised the ability of transgender people like me to safely navigate our daily lives.

As the lead plaintiff in the lawsuit the ACLU and Lambda Legal filed to stop this measure, I’ve spent the last three years fighting alongside LGBTQ North Carolinians and others to mitigate the harm caused by H.B. 2 and its discriminatory replacement law, H.B. 142.

Yesterday, we secured an important victory: a federal court ordered that neither of these laws can be used to bar transgender people from North Carolina restrooms that match who we are.

We reached this settlement, known as a consent decree, with Governor Roy Cooper, who officially agrees with us that trans people in North Carolina have the right to use the correct public restrooms for their gender. But the leaders of the General Assembly, who passed H.B. 2 and H.B. 142, refused to sign on.

After years of managing the anxiety of H.B. 2 and fighting so hard, I am relieved that we finally have a court order to protect transgender people from being punished under these laws.

Being able to use facilities that match our gender is a basic necessity for participating in public life and being treated as full members of society. It is not a luxury.

The nationwide outcry that followed these discriminatory laws sent a message that we still have to amplify now: Trans and non-binary people belong in public spaces. We belong in North Carolina. We belong everywhere.

Yesterday’s order provides some clarity and relief for those of us who have been suffering under H.B. 2 and H.B. 142 for years. It is an important victory but not a complete one. Local protections for LGBTQ people are still banned under state law and so many members of our community, particularly Black and Brown trans and non-binary people, continue to face violence, harassment, and discrimination simply because of who we are.

This October, the Supreme Court is looking at the case of Aimee Stephens, who was fired for being trans. The Trump administration has attempted to roll back the rights of trans people at every turn. Yet another Black trans woman, Denali Berries Stuckey, was killed this week in South Carolina. My community faces violence every day.

While a part of this court fight in North Carolina may be ending, our fight for full justice continues.