It's Time to Come Out For Freedom 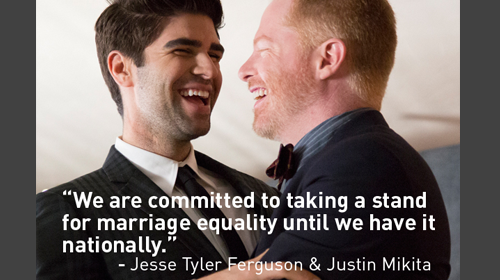 “We just want to be married.”

These words from Jesse Tyler Ferguson, star of ABC’s Modern Family, about his husband Justin Mikita, in a new ACLU video, reflect the simple motivations behind the nationwide movement to secure the freedom to marry for all couples. Jesse, an ACLU Celebrity Ambassador for the Freedom to Marry and Justin are “Out for Freedom!” As vocal supporters of the importance of the freedom to marry, this candid conversation about their own relationship and their advocacy efforts to spread the freedom to marry in Jesse’s home state of New Mexico and beyond, highlights a national movement for equality for all loving, committed couples.

While momentum and support for the freedom to marry is clearly growing at a phenomenal rate there is still work to be done. In fact, the ACLU and the ACLU of Utah recently filed a lawsuit on behalf of four same-sex couples who were legally married in Utah after a federal court struck down a state ban, but before the U.S. Supreme Court temporarily halted marriages from taking place while the state challenged the decision. Although the marriages were valid, the state has announced that it will not recognize the relationships.

Utah’s governor has the authority to protect these couples while the courts decide on the freedom to marry in Utah — and he needs to know that thousands of Americans are watching and demanding that he does the right thing. Today we need you to come “Out for Freedom!” Tell Gov. Herbert to allow Utah agencies to provide equal protections and recognize the marriages of all same-sex couples that were legally married in Utah.

Together we can transform our country’s landscape until the freedom to marry is in every state.