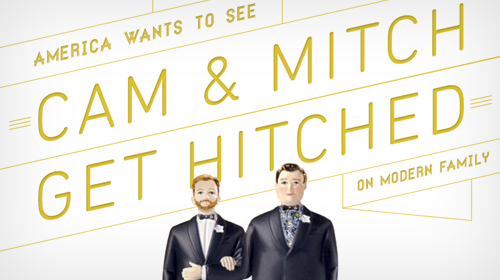 You might be asking yourself: What does Modern Family have to do with an upcoming landmark Supreme Court case about the freedom to marry? Well, the ACLU launched a campaign today urging Modern Family’s producers to script a wedding episode for popular gay characters Mitchell Pritchett and Cameron Tucker. The campaign comes as Americans await the Supreme Court’s decisions on two important LGBT equality cases challenging the federal Defense of Marriage Act and California’s Prop 8. The ACLU is direct counsel in the DOMA case, United States v. Windsor. Additionally, a stream of states have recently passed marriage equality measures.

Since 1936, the ACLU has been fighting for the rights of gay and lesbian Americans and their families. While we continue to fight with everything that we have for real-life LGBT couples and individuals, we’d like to take a moment to ask for your help in support of a fictional couple. One couple in particular, actually. A couple you have seen on your TV.

Each week, millions of Americans tune into Modern Family, one of the most popular shows on television today. For four seasons, we’ve gotten to know Mitchell Pritchett and Cameron Tucker; and their adopted daughter Lily. The most remarkable aspect of Mitch and Cam being in a same-sex relationship is that the there IS no remarkable aspect of their being in a same-sex relationship. They experience the same ups and downs as any other couple. Arguably, their most controversial family moment was when flower girl Lily said the f-word last year.

But there’s one important thing that Cam and Mitch haven’t done yet. They haven’t gotten married. So we’re asking ABC to let Mitch and Cam tie the knot, and we’re asking for your help.

Why is it so important for this to happen? The past few years have seen an amazing groundswell of support for giving same-sex couples the freedom to marry. In the past month alone, three states have recognized that committed same-sex couples should have access to the recognition, protection, and dignity that only comes with marriage. Public opinion polls have consistently shown that a majority of Americans now support marriage for same-sex couples.

A lot of this was accomplished by voters getting to know their family members, friends, co-workers, and neighbors who are in committed same-sex partnerships. It’s harder to deny these couples the same recognition and protection enjoyed by different-sex couples when you know them and know their families and see that they experience the same joys and hardships as any other family.

For many Modern Family devotees, Mitch and Cam may be the same-sex couple many Americans are most familiar with. It may seem trivial at the outset, but the role of television to advance social change should not be underestimated. From Ellen coming out in 1997 to the vice-presidentially transformative power of Will and Grace, to Mitch and Cam, TV has helped introduce many Americans to the LGBT community and inspired many LGBT Americans to come out of the closet. This added visibility has helped build the momentum that we’re seeing in state legislatures, courtrooms, and the ballot box today.

Having two main characters in a wildly popular show get married would put the issue of marriage equality in living rooms across the country and generate conversations about the importance of allowing same-sex couples to marry – the kinds of conversations that we know change hearts and minds. And because it’s a weekly series, the message won’t go away during the closing credits. It will be back next week, and the weeks after that, and again during summer reruns. The wedding would demonstrate that marriage —with its unique recognition of love and commitment— matters. And it’s a choice that should be readily available.

So help us show that the media can lead the charge on the freedom to marry. Join the campaign to get Cam and Mitch down the aisle here.