Behind the Scenes of the Transgender Rights Fight in Texas 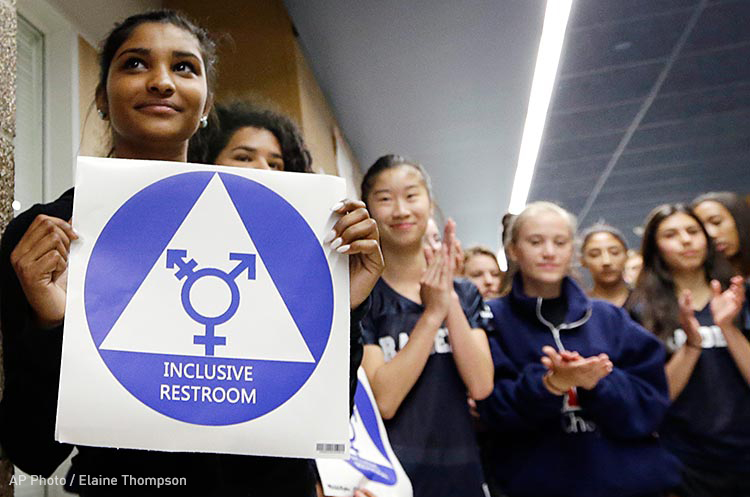 This piece originally appeared in The Advocate.

Every year at about this time, my office gets calls from anxious parents concerned about whether their kids will have access to a safe and fair learning environment when they start school in the fall. One year, it was a grandfather raising a transgender teen whose small-town high school was intent on suspending her for how she dressed (which was, incidentally, exactly like every other girl at her school). Another time, it was the mother of an elementary school child whose teachers were refusing to call the child by her correct name and gender pronouns, wreaking havoc among classmates, who recognized the child as female. Then there was the high school senior barred from going to prom on the same basis as other kids because of the rules about what students must wear and whom they could bring as dates.

We hear about taunting and bullying that is ignored — or even initiated — by teachers and school administrators. We meet kids locked out of the formative experiences of youth that many of us take for granted, like attending school dances or participating in band or cheerleading. And we hear from kids who put their health at risk daily rather than endure the humiliation and stigma of using a restroom that doesn’t correspond to their gender identity. Some days, we’re all in tears — parents and lawyers alike.

But here’s the thing. Even in Texas, a rock-solid red state with an off-the-charts religiosity score, we also see transgender kids thriving in school districts committed to treating all students with dignity and respect. In fact, many of the largest school districts in the state have had nondiscrimination policies that include gender identity and gender expression for years. Like school districts around the country, they’ve navigated the supposedly thorny issues of dress codes and team sports and bathroom access in a way that supports their transgender students and creates the conditions for their success.

And when parents and transgender kids courageously step forward to advocate for better policies at school, more often than not they succeed. I cannot help but be humbled and inspired by what transgender kids and their families have shown all Texans about how to make government accountable to the people.

So I am dismayed that the state of Texas seems hell-bent on relegating transgender students to permanent second-class status under the law. I suspect that most of the politicians hailing a recent ruling by a federal court in Wichita Falls, Texas, that blocks Department of Education guidance on transgender students don’t know these kids — the ones demanding the dignity and respect they deserve at school or the ones blossoming into their potential because they have the support of their school community. In fact, Texas Attorney General Ken Paxton, a chief architect of the litigation, admitted that he hadn’t spoken with any transgender students or their families before bringing the case. How else could Paxton and the other state leaders argue that transgender kids ought to be excluded from the protections of Title IX, a federal law that is supposed to ensure everyone has equal access to educational opportunity?

In the short term, except for sowing confusion among school administrators, the legal effect of the decision is minimal. The order temporarily prevents the Obama administration from acting on the guidance. But school districts in Texas and around the country that already have good policies to protect their transgender students are free to enforce them. School districts considering such policies are free to adopt them. And parents and kids who want to challenge how their schools treat trans kids are free to advocate — and to bring suit if necessary. In the longer term, advocacy organizations like mine will keep fighting discrimination until everyone is legally protected. Indeed, there are cases in the pipeline that could reach the U.S. Supreme Court as early as next year.

But the effects of what is happening in that Wichita Falls courtroom reverberate beyond the law books and legal precedents. The headlines fixate on bathroom access, and local TV stations have broken out their B-roll of those iconic stick-figure signs that distinguish the men’s and women’s restrooms. We’re once again hearing the refrain of “no men in women’s bathrooms” from those organized against equality. The word is going out from pulpits that our faith calls us to take a stand. Candidates for office are staking out policy positions. People are taking sides in the larger debate. Are we a people who single out transgender men and women for different treatment under the law? Or are we a people who make determined — if painstakingly slow and unsteady — progress toward realizing the high ideal of equality upon which our county was founded? What does this legal assault on vulnerable children tell us about the direction we’re going?

The answer matters a great deal. School is starting again here in Texas. Our phones are ringing. Parents are worried. Kids are determined. And I’m holding my breath.