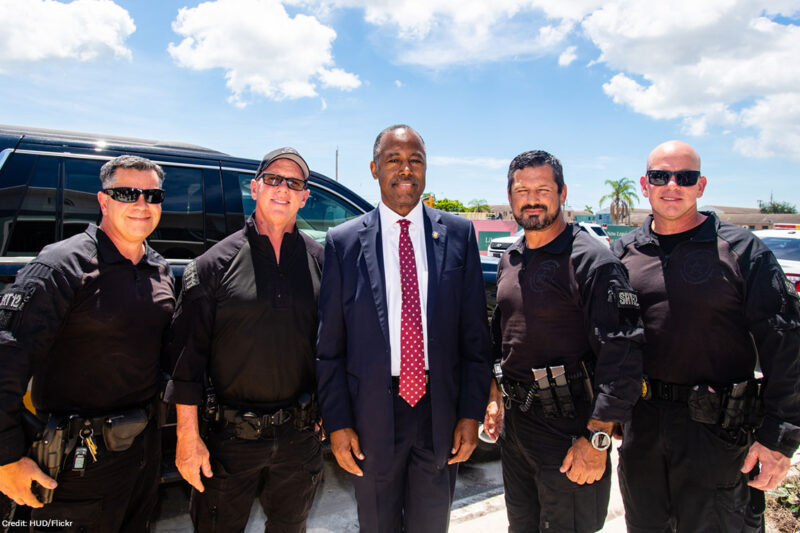 The world has watched in horror as migrant families have been forcibly separated, placed into camps, and subjected to the cruel conditions of detention, as part of the Trump administration’s sustained assault on immigrant rights. The Department of Housing and Urban Development’s (HUD) proposed “mixed status” rule is yet another form of family separation, with clear negative implications for survivors of domestic violence. That’s why today the ACLU, ACLU of California and other state affiliates filed public comments condemning the proposed rule, joining the ranks of the National Housing Law Project, National Low Income Housing Coalition, and countless other advocates.

On May 10, 2019, HUD proposed a rule that will effectively evict tens of thousands of immigrant families, and jeopardize housing subsidies for millions of U.S. citizens. HUD’s new rule will ban “mixed-status” families — comprised of household members who are both eligible and ineligible for federal housing assistance — from living in public housing and Section 8 programs, even though assistance is already prorated, or decreased, to exclude ineligible members. Based on HUD’s own analysis, the new rule will threaten housing for 25,000 mixed-status families — including over 55,000 children who are U.S. citizens or green card holders. The proposed rule will also impose burdensome documentation requirements on over 9 million residents who receive housing subsidies, which will disproportionately impact low-income residents, people of color, Black individuals, people with disabilities, and elderly Americans.

Importantly, being “ineligible” for federal housing assistance does not always mean that a resident is undocumented. For example, domestic violence survivors who have U-Visas — which provide victims of abuse and other crimes with temporary immigration status — are not eligible for such assistance and will face eviction if HUD’s proposed rule is finalized. This new rule will be particularly devastating for survivors like Margarita, who are the sole providers for “eligible” children. After fleeing abuse in Mexico and the U.S. and battling homelessness for nearly a decade, Margarita was overjoyed when she and her children were finally able to move into a public housing apartment last year. Now Margarita fears that HUD’s proposed rule will force her family into homelessness yet again. As recognized by Congress in its enactment of the Violence Against Women Act, access to stable housing is critical to the wellbeing of domestic violence survivors and their families. HUD’s new rule would erect greater obstacles to such access, destabilizing families as they attempt to escape violence.

If finalized, HUD’s new rule will force affected families to make an agonizing choice: either break up to allow eligible members to keep their benefits — a decision that the agency itself characterizes as “ruthless” — or forgo assistance to allow the family to stay together. Recognizing the impossibility of this choice, HUD’s own analysis predicts that the very “fear of the family being separated would lead to prompt evacuation by most mixed households.”

No matter the decisions of “mixed-status” families, the consequences are grave. Forcing family members to live separately inflicts significant harm, promotes distrust of government actors, and discourages those in need from seeking assistance. For the majority of families that choose instead to forgo benefits, the housing instability prompted by the proposed rule will be costly and may even result in temporary homelessness. Involuntary displacement frequently leads to employment loss, loss of material possessions, and lasting health issues, including substance abuse. Moreover, evicted families, often headed by women of color, will struggle to find stable housing as they are rooted out by landlord screening policies that force these individuals to seek substandard housing elsewhere or risk homelessness.

Moreover, HUD’s proposed rule is administratively unwise. By HUD’s own analysis, the implementation of the new rule will cost between $193 to $227 million every year. This increased cost is associated with providing non-prorated housing subsidies to fully eligible families that take the place of mixed-status families. HUD also predicts that the proposed rule will diminish both quantity and quality of public housing. At a time when the Trump administration is threatening to slash the HUD budget, the move to inflate housing assistance resources is nonsensical, and suggests ulterior motives.

Perhaps the most damning feature of HUD’s proposed rule is that it simply isn’t justified. HUD claims that the new rule is necessary to prevent undocumented residents from receiving federal aid and assistance, in accordance with Section 214 of the Housing and Community Development Act of 1980. But the law already prevents ineligible immigrants from receiving HUD funds. Indeed, Section 214 explicitly authorizes a family’s housing subsidy to be prorated to account for ineligible household members. The true motivation behind this rule was clarified by HUD Secretary Ben Carson on May 21, who noted that this proposal would allow Congress “to engage in comprehensive immigration reform.” The proposed rule has never been about conforming with Section 214 — this is about engendering fear into immigrant communities.

As the Trump administration’s anti-immigrant agenda encroaches on the home, we cannot sit idly as our government attempts to make the most intimate arena of life as inhospitable to immigrants as the rest of our country. Today, we speak out against family separation in the home, just as we have in the case of family separation on the border. We urge HUD to immediately withdraw the proposed rule and advance housing policies that strengthen—not undermine—the ability of families to access stable, affordable housing.