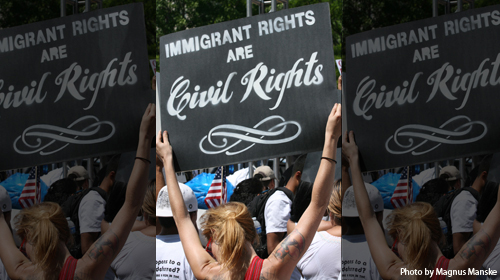 As 2013 comes to a close, political pundits will no doubt say that the big immigration story of the year was the paralysis of national immigration reform inside the Washington D.C. beltway. That may be so, if all you’re doing is counting lines of copy. But something else happened this year, an arguably bigger and certainly more decisive 2013 immigration story: over a dozen states approved one or more significant pro-immigrant measures, including common sense reforms advancing immigrant integration and equality in areas under the state’s proper control. And for the second straight year, no new state followed Arizona down into the sinkhole created by its infamous SB 1070 law, which requires all police to verify the immigration of status of anyone they suspect to be undocumented.

Recall that not long ago, states seemed to be stumbling over one other to be next in line after Arizona to pass purely punitive laws whose stated intent was to make life so harsh for undocumented immigrants and their families (including their U.S. citizen kids), that they would “self-deport.” Some states, such as Alabama, even tried to “one-up” Arizona in severity. The ACLU and its partners in the civil rights community challenged every single one of these laws in court, and we continue to succeed in blocking most of their worst excesses. In 2012 the Supreme Court reviewed Arizona’s SB 1070 and blocked three of the four provisions before it. The Court did allow one of the law’s core provisions to go into effect – the so-called “show me your papers” provision.

Many predicted that this decision would unleash a rash of new Arizona copycat laws in 2013. This didn’t happen, not even in Kansas, where elections intensified conservative domination of the legislature and appeared to set the scene for anti-immigrant state law architect Kris Kobach, the Secretary of State in Kansas, to finally bring his model home. Instead, the Arizona-styled bill he championed did not even get a single courtesy hearing in the state’s legislature.

What happened instead in 2013? State after state adopted pragmatic pro-immigrant laws that are arguably the complete opposite of Arizona’s approach:

There is much to celebrate in this wave of victories for immigrants’ rights across the county, and we’re optimistic that there will be more to come in 2014.