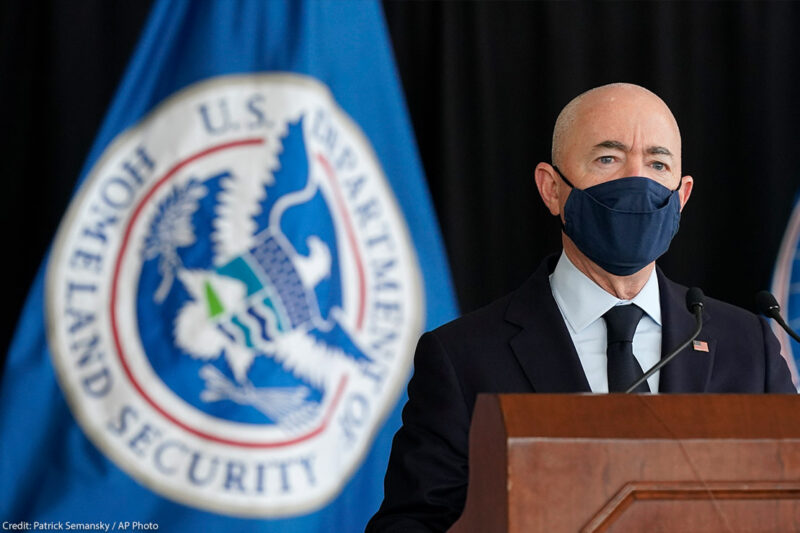 As he approaches the sixth month anniversary of his confirmation, Homeland Security Secretary Alejandro Mayorkas’ progress report is mixed.

In the days after his nomination, Homeland Security Secretary Alejandro Mayorkas signaled his willingness to make a decisive break from Donald Trump’s racist and anti-immigrant policies. Mayorkas is the first Latino and the first immigrant to lead the Department of Homeland Security, the government agency that is most responsible for delivering the “fair and humane” immigration system President Joe Biden promised as a candidate.

As he approaches the sixth month anniversary of his confirmation, Mayorkas’ progress report is mixed: Despite some notable high marks, the incremental approach Mayorkas has embraced is not doing enough to reverse the drastic restrictions of the Trump administration and to end the ongoing trauma inflicted by America’s inhumane immigration enforcement system.

While there’s been a sharp decrease in ICE arrests, a trend that began before he assumed his position, some ICE agents are flouting the administration’s directives and ICE continues to intimidate immigrants across the country in collaboration with local police.

Mayorkas moved to close two detention sites in Georgia and Massachusetts, but ICE has doubled the number of immigrants and asylum seekers locked up in detention centers under his watch, and kept open dozens of facilities with appalling records of abuse and neglect. And while Mayorkas ended the “return to Mexico” policy implemented under Trump, he has largely continued Trump’s illegal misuse of the Title 42 public health authority to expel people seeking asylum without due process.

Here’s how Secretary Mayorkas’ record in three key areas — reining in ICE abuses, closing ICE detention centers, and taking a fair and humane approach to border policy — matches up with his rhetoric and voters’ mandate to dismantle Trump’s anti-immigrant policies and bring humanity and fairness to our immigration system.

ICE arrests are down sharply, yet some ICE agents are flouting the administration’s directives. Meanwhile, ICE continues to be entangled with local law enforcement through programs like 287 (g), which were massively expanded under the Trump administration. Secretary Mayorkas should use his power to fundamentally reform and reorient ICE so that it protects and supports communities rather than targets them.

For four years, former President Donald Trump weaponized ICE, brandishing the threat of mass raids and deportations to further a racist agenda and score points with his base. Under Mayorkas’ leadership, ICE’s immigration enforcement practices are changing.

In February, Secretary Mayorkas directed ICE to focus its civil immigration enforcement resources on threats to national security, border security, and public safety. While seriously flawed, the directive went further than the Obama administration’s in limiting deportations, and evidence suggests that it has made a real impact on the ground. DHS has also moved to limit enforcement actions at courthouses and vaccine distribution centers, while working to find solutions for survivors of crime and deported veterans. And in May, a memo to ICE attorneys relayed new guidance on which groups to prioritize for civil enforcement and arrests.

However, Mayorkas has repeatedly declined to rein in ICE agents in other ways. He rolled back the Biden administration’s initial move to largely prohibit agents from conducting street arrests, which have involved “snatch and grab” operations, where agents in plain clothes force people off the street into unmarked cars, and agents masquerading as local police — in violation of the Fourth Amendment.

Agents are now justifying arrests by categorizing people as “priorities” even though they do not meet the criteria set out in the May memo, resulting in thousands of people wrongly deported.

Mayorkas’ DHS has also not done enough to reduce ICE’s tentacular reach into communities across the country. Since the early 2000s, ICE has tapped state and local police, sheriffs, and corrections officials to participate in arrests and deportations through the 287(g) program, Secure Communities program, and ICE detainers. These programs have emboldened local police to engage in racial profiling, incentivizing pretextual arrests made on state or local criminal grounds — with the actual goal of identifying immigrants to detain for ICE.

The Trump administration used these programs to intimidate immigrant communities and drive a wedge between them and local law enforcement. The 287(g) program expanded to an additional 116 partner agreements with local law enforcement under Trump. Despite promises President Biden made on the campaign trail, DHS has only ended one 287(g) agreement, and has left in place Trump-era changes making these partnerships last indefinitely instead of three years.

Secretary Mayorkas has the power to end the 287(g) program, fundamentally reform ICE, and decouple its work from local policing.

Mayorkas oversees more than 200 ICE detention facilities scattered across the country, including many with documented patterns of inhumane treatment and conditions.

In May, DHS announced the closure of two sites: Bristol County House of Corrections in Massachusetts and Irwin County Detention Center in Georgia, the site of horrific allegations of abuse, including the use of tear gas against detained people seeking safety from COVID-19, forced hysterectomies, and systemic medical neglect. In July, ICE announced a policy against detaining and arresting pregnant, postpartum, and nursing individuals — a shift long sought by the ACLU and other advocates.

These were positive steps, but Mayorkas failed to seize the opportunity to shrink the ICE detention machine. In February, after Mayorkas was sworn in, ICE held approximately 13,500 people in detention each day — compared to a high of 56,000 people per day under the Trump administration. Instead of taking the opportunity to close detention sites — saving millions in taxpayer dollars — and expand the use of community-based alternatives to detention, ICE in recent months has doubled the average daily population of detention facilities. As of July, DHS reports an average daily detained population of 26,200 people.

The Trump administration signed unusually wasteful contracts that expanded the use of private prison companies and opened detention centers in facilities with lengthy histories of abuse. The ACLU called on Mayorkas to shut down these and other facilities, identifying 39 detention sites with inhumane and life-threatening conditions and extremely limited access to legal counsel. Yet the administration has only closed two, and asked Congress to fund 30,000 detention beds in the coming year.

While the Biden administration moved to end the Justice Department’s contracts with private prisons operating criminal detention sites, it has not extended that to immigration. Immigrants and people seeking asylum continue to languish in privately operated prisons that are incentivized to keep conditions poor and even unsafe to maximize their profits.

Perhaps most galling, as detention sites close, ICE is choosing to transfer people to other detention facilities rather than release them to their communities and families — undermining hard-won progress and jeopardizing the health of detained people, as well as their ability to effectively present their cases.

A FAIR AND HUMANE APPROACH TO THE BORDER

More must be done to ensure families severely traumatized by Trump’s family separation policy are made fully whole.

While some progress has been made to end harmful Trump-era asylum policies, until the federal government brings a complete end to the misuse of “Title 42” public health authority to expel people seeking asylum with no due process, the continuation of this cruel and unlawful policy will overshadow other developments.

The Biden administration rescinded the “zero tolerance” policy devised by the Trump administration, correctly understanding that its function served as a horrific tool for separating families at the border. Mayorkas is leading a task force to reunite separated parents with their children. Recently, a small number of families were reunited. The process has been slow-moving and serious trauma lingers. Mayorkas’ task force should focus not only on reuniting these families, but on ensuring that they have legal status, access to social services, and other resources that they need in order to recover.

In February, Mayorkas announced that he would rebuild the asylum process, which is supposed to offer people who flee persecution in their home countries a fair opportunity to seek protection and safety in the U.S., but which the prior administration attempted to dismantle. He has made some progress toward this goal, such as formally ending Trump’s “return to Mexico” policy. But he has largely kept in place the Trump administration’s Title 42 order, which effectively closes the borders to people seeking safety in the U.S., purportedly because of the pandemic. Under Title 42, people seeking asylum are being returned to Mexico or their countries of origin, where many face persecution and violence. Title 42 imposes particular harms on Black migrants, This policy is not only inhumane, it is illegal. Public health experts have made clear that Title 42 has no scientific basis as a public health measure; even under Trump, experts at the CDC were opposed to issuing the order in the first place. It is long past time for the Biden administration to end the Title 42 order and restore people’s ability to seek protection from persecution in the United States, as U.S. and international law require.

Mayorkas and the Biden administration have a mandate from voters to reform an immigration system that has been weaponized, politicized and made increasingly punitive. We will continue urging Mayorkas to prioritize major reforms to undo the harm the Trump administration caused to families and communities, and to make substantial progress toward rebuilding the asylum process and reining in abuses by ICE and its agents.